It lives in complete darkness and can survive without food for months. It is completely blind and navigates the darkness using its vibration-sensitive auditory system. However, scientists still know relatively little about the unique physiology of this cave-dwelling olm. Its further research was facilitated by Markéta Tesařová from CEITEC BUT, who used X-ray computed microtomography to create a virtual 3D atlas of this protected animal.

The olm (Proteus anguinus) is the only European amphibian that lives in underground environments. It is an endangered species and is most commonly found in the Dinaric karst caves in Slovenia, Croatia and Italy. It has evolved a number of unique morphological, physiological and behavioural mechanisms to be able to survive in absolute darkness and cold. Because it is protected, lives in inaccessible conditions and cannot be kept in a laboratory, it has remained a mystery to biologists.

However, the online database of the Gigascience journal now offers a complete atlas of 3D models of the olm, including its developmental stages, which allows the researchers to thoroughly study this extraordinary creature and through – from its brain and cartilage to the complex olfactory, visual and reproductive systems. The main author of the atlas is a PhD student Markéta Tesařová from the X-ray and computed tomography laboratory at CEITEC BUT.

Originally a side project, it took the scientist six years to complete and the project involved 10 other specialist departments – mainly from Italy and Slovenia, but also from Sweden and the USA. “At the time, we collaborated with a Swedish laboratory to research the regenerative abilities of salamanders. At that time I was on a research stay in Trieste, Italy, and since the olm is quite popular in this area, they offered us a rare archival collection of olms preserved in alcohol to examine,” Tesařová described.

The individual specimens, some of which were up to 30 years old, were then examined at CEITEC BUT using X-ray computed microtomography. Although the olm has been X-rayed in the past, researchers have only mapped its skeletal system.

“We were the first to also map cartilage and soft tissue, including the brain. Samples were soaked in heavy metal solutions to increase contrast. We then made X-ray projections from different angles and mathematically modelled its individual parts in 3D,” added Tesařová, noting that its non-destructiveness was a great advantage of this method. In addition to the 3D models of the olm, Tesařová also created models of the Mexican axolotl, a salamander that lives in Mexican lakes. This allows scientists to compare the physiology of these amphibians.

The X-raying of the samples took the PhD student one year, but she spent the next five years processing the data. “It was not easy to distinguish soft tissue from cartilage – for example, in the structures of the olm’s eye, which are stunted inside its head. I had to continuously consult with biologists, speleologists and study older hand-drawn publications,” explained the PhD student.

During her research, she was surprised to find that even in adult olms, there was a cartilaginous part typical of the earlier developmental stages. “We have discussed this a lot and one of the hypotheses is that the cartilage was preserved because it helps transmit sound to the auditory system. When hunting, the olm tilts its chin to the ground and can locate its prey through vibrations. Both its lower jaw and facial cartilage seem to help with accurate orientation in space,” she added.

Although research on the olm is now coming to its conclusion at CEITEC BUT, it is just the beginning for speleologists and biologists around the world. “We have been contacted by various scientific institutions that plan to use the 3D models to study the physiology of the ear, the reproductive tract or the predatory behaviour of the olm, which can be reconstructed from the way its muscles attach to cartilage and bone,” described Tesařová. The answers could be provided by the 3D models that have just been created.

The PhD student will present her work in May at the 4th “SOS Proteus” international meeting in Trieste, where she will also meet with experts from other institutions with whom she has collaborated on the 3D database. These include the Italian research institutes Elettra-Sincrotrone and Speleovivarium Erwin Pichl, the Tular Cave Laboratory and the Slovenian Academy of Sciences and Arts. 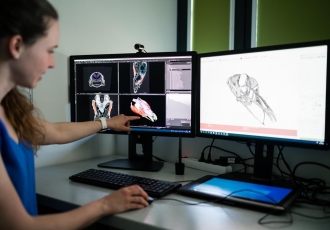 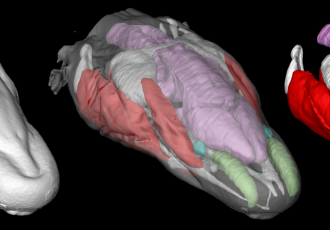