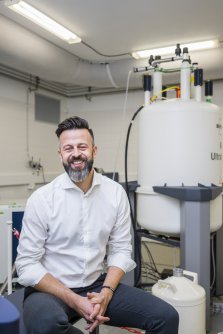 Press release, Brno, 10th October 2017
Scientists from CEITEC Masaryk University (MU) studied how the cell recognises the end of the genes during transcription of genetic information. The scientists have discovered what is the structure of the molecules responsible for finding the right end of the genes. Thanks to this discovery, they can better understand the functioning of the transcription of the genetic information as well as the influence of this process on e.g. the development of some diseases. Their findings have been just published in a prestigious PNAS magazine. The research is a part of a prestigious grant of the European Research Committee (ERC) received by Richard Štefl two years ago.

Just around one percent of human genome contains  so-called “protein-coding genes” on the basis of which the cell is able to produce proteins. They represent the basic building stones of the organism and they have also a number of various functions necessary for life. To be able to produce the needed protein in the right time, the cell must find the right gene in DNA and transcribe it.

Richard Štefl, the Group Leader, explains the complicate transcription of DNA: “The responsibility lies on the complex of molecules called RNA polymerase, which, however, is not itself capable of recognising the right beginning and end of the gene which is presently needed. The thing is that the genetic information contains a number of incorrect beginnings and endings that do not mark particular genes, but have different functions.” Therefore, to be able to recognise the right gene, the RNA polymerase needs help of another so-called regulatory molecules. It was their structure which has been described by the scientists of CEITEC MU.