The terahertz domain which extends between 100 GHz and 30 THz is known for
difficulties to generate and control the radiation, especially in the range below 3
THz. This frequency range is of particular interest for detection of molecules in
the gas phase due to their rotational spectra. Moreover, the range up to 1 THz is
rich in rotational lines of molecules present in the interstellar medium (ISM). The
detection of such lines is important to understand physical and chemical
processes in the ISM, and formation of stars and galaxies. It should be noted that
the detection of new molecular species in the ISM is very difficult without
preliminary studies of their spectra in the laboratory with high resolution and
precision.
This seminar is devoted to experimental aspects of high-resolution terahertz
molecular spectroscopy. Historically, the most efficient sources in terms of
bandwidth, power and spectral purity in the terahertz domain were electronic
tubes backward wave oscillators. However, in the last decade considerable
progress has been made in the development of new solid sources based on the
principle of harmonic generation. The main topic of the seminar is the Lille
terahertz spectrometer in the range 0.05 – 1.5 THz. The spectrometer uses
frequency multiplication chains based on Schottky diodes as radiation sources.
The coupling of THz source with a reference synthesizer based on direct digital
synthesis (DDS) technique allowed the development of the fast-scan feature
with the ability of precise frequency measurement. Recently, the DDS technique
was also used to generate short pulses including chirped pulse feature, and thus
to develop a Fourier-transform terahertz spectrometer. The design and
performances of the spectrometer will be presented. 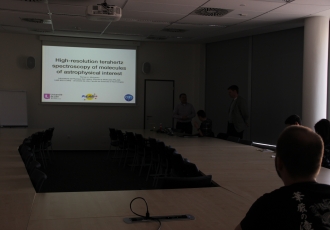 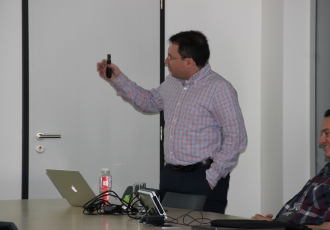 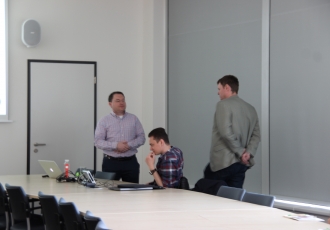