ProfileAbout UsNewsJiří Tocháček: We Know How Polymers Degrade in the Eternally Frozen Antarctic Environment
About Us

Jiří Tocháček: We Know How Polymers Degrade in the Eternally Frozen Antarctic Environment

About five years ago, the media reported that BUT scientists were the first to study the aging of plastics in Antarctica. Today, the circle is slowly closing and a unique interdisciplinary project, led by Jiří Tocháček from Josef Jančář's Advanced Polymers and Composites research group from CEITEC BUT, is publishing the first results. Synthetic polymers have literally flooded the world and, although they degrade naturally, their rate of disintegration is still much lower than their rate of production. Trying to change it is one of the goals of Jiří Tocháček's project. Tocháček is an internationally recognized expert in the field of polymer degradation and stability. 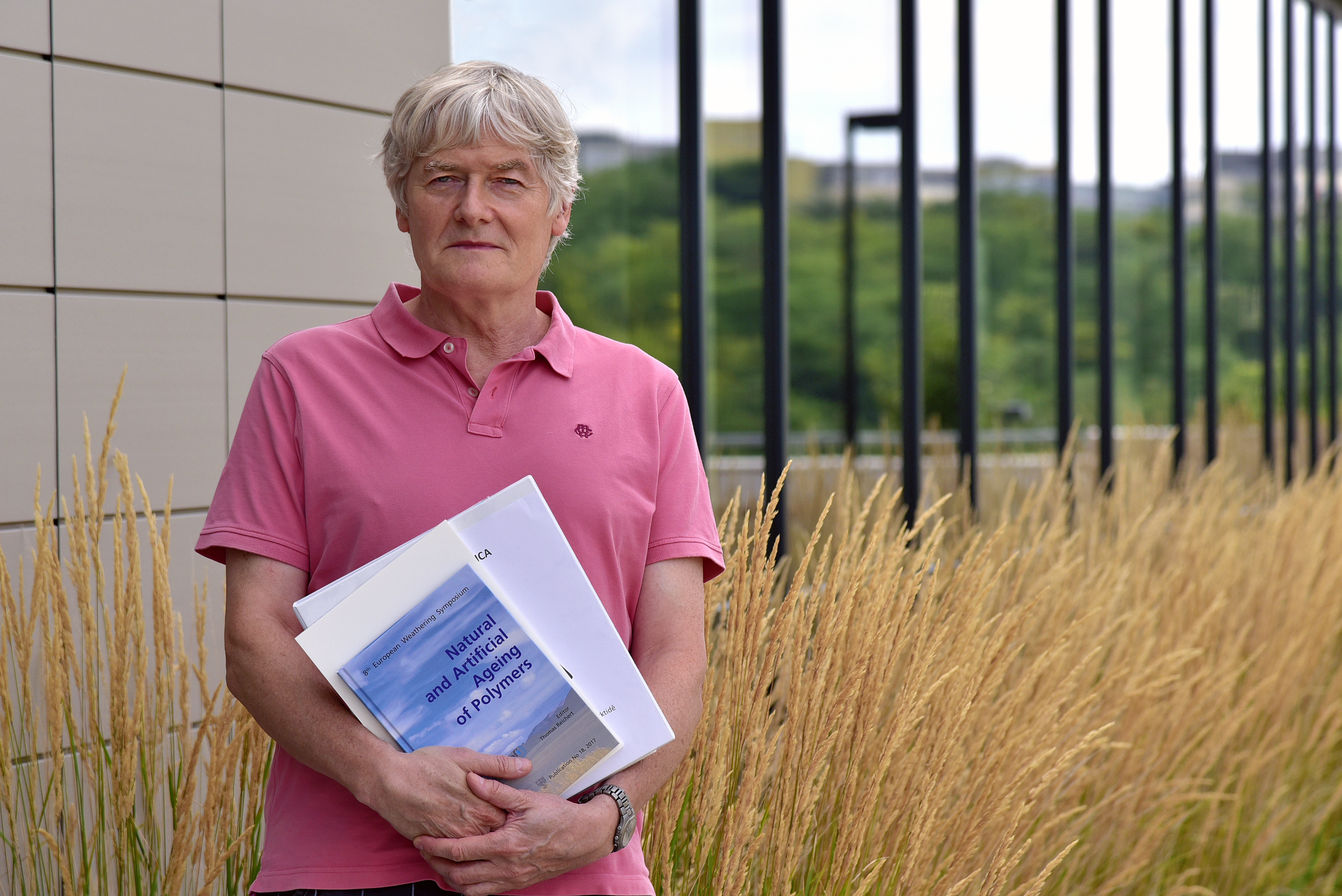 You use the term "weathering". What is it all about?

Weathering means the aging of polymers in the natural climatic conditions of our planet. This is one way to learn more about the technical capabilities of these materials and their reliability in their intended application. Test exposure sites are located around the world, especially in locations with higher sunlight and higher temperatures in order to achieve results as quickly as possible.

How did Antarctica came to your mind?

It all began in 2013, when geochemist Lukáš Krmíček from the Faculty of Civil Engineering of the BUT returned from an expedition at the J. G. Mendel station operated by Masaryk University on James Ross Island in Antarctica. Although his specialty has not much in common with plastics, his chemical sense was undeniable, and he noticed the disturbed surface of polymer tubes that serve as protection cabling connecting the individual work stations. Although Lukáš and I did not know each other at that time, a year later, having a good time with beer, things came together and then everything went quickly.

How attractive is Antarctica for you as for scientists?

Antarctica was still untouched in this field, and no such systematic experiment with plastics has been carried out yet. It's not just a romantic continent full of snow, ice and penguins. Every year, more and more plastic waste comes from its shores, coming from all over the world. Thus, the issue of natural degradation of plastics in the local environment becomes more and more current day by day. Given the very low temperatures and the short daylight hours of sunshine, the Antarctic environment seems to be polymer friendly at first glance. On the other hand, it is Antarctica that is most affected by ozone anomalies allowing better passage of some solar radiation components.

How difficult was it to organize such a logistically demanding project?

Within a few weeks we assembled a group of researchers from various disciplines and institutions who were interested in collaborating on the project. From Masaryk University there was the head of the Antarctic scientific station Pavel Kapler and climatologists Kamil Láska and Klára Čížková, then Michael Tupý from Fatra, Radka Bálková and Petr Poláček from BUT, Jan Merna from ICT Prague and Zdeněk Buráň from Polymer Institute Brno. Within a relatively short time, CEITEC BUT prepared samples of targeted polymers that were installed on test panels. Five panels were handed over to the nearest expedition at the end of 2014 and in January 2015 the samples were exposed in Antarctica. The second series of five panels serving as a reference was exposed in parallel on the roof of the Faculty of Science library. Thus began a unique long-term research project on the degradation of synthetic polymers in the continent's climatic conditions, whose impact on the life of polymers has been virtually unknown.

How did the sample evaluation worked?

Exposed polymers were taken and brought back every year by expeditions of scientists who regularly visit the station. Samples were continuously processed and evaluated in the laboratories of CEITEC BUT and other participating institutions. The first preliminary results were known after the first sampling, but in terms of reliability and seriousness it was necessary to obtain much more data. Only the results after three years of exposure could be considered as meaningful. These were published this August in Polymer Testing (Elsevier), one of the reputable magazines dealing with the properties and behaviour of synthetic polymers. Due to the topicality of the issue, lectures were also accepted at two foreign conferences, one of which is the 9th European Weathering Symposium EWS, which will take place in September 2019 in Basel, Switzerland.

What did the research reveal?

The results showed that the Antarctic environment, despite its very low temperatures, is not nearly as friendly to the polymers as initially expected. The effect of the ozone hole transmitting a higher proportion of the UV component of global solar radiation has proved to be very significant. And although the results obtained so far have shown that degradation due to outdoor exposure is still faster in Brno, representing the typical climatic conditions of Central Europe, the difference is surprisingly not large. In addition to its own radiation, it is also exposed to atmospheric pollution typical of industrial agglomeration, which is completely absent in Antarctica.

Does this results ending the project?

The project is planned for five years, but for samples that have sufficient composition to survive much longer at both exposure sites, we are considering extending the exposure.

From what sources was the project financed?

Given the need for a quick start, there was no time to apply and wait for an uncertain result. The project thus has a rather specific way of funding - it does not have its own resources, but was supported by several different grants from MEYS resources, of which only one was directly dedicated to the logistics of materials and equipment transported to the station. This inconsistency in the way in which financing has proved to be a partial advantage, as it did not entail a serious administrative burden. On the contrary, it was most suitable for the specificity and long-term nature of the project, with most of the work always being several months after the sampling and for the remainder of the year waiting for more samples, which were worked exclusively on in the natural environment.

How did you work in that big interdisciplinary group?

Being multi-institutional and, in a way, multi-disciplinary, the project is quite unique. Although the main subject of research is the degradation of polymers, only half of the authors of the publication are polymer chemists. The others are geographers, geochemists and climatologists who have been involved in sample preparation, radiation characterization and logistics. Without their participation, the implementation of this demanding project would not be conceivable. Cooperation with them was excellent. Simply because they all liked to cooperate and were convinced of the importance of their actions.

Plastics in the Antarctic aged differently. Unique research detecting why

Testing of polymers under extreme conditions of Antarctica is focused on research, which is attended by experts from CEITEC BUT and Faculty of Civil…

Polymers in Antarctica Age Slower Than in Brno