The February 2021 issue of the National Geographic magazine devoted to viruses and how they shape our world pictures the three-dimensional structure of phage P68. The structure was determined by PhD student Dominik Hrebik from the structural virology group of Pavel Plevka from CEITEC. 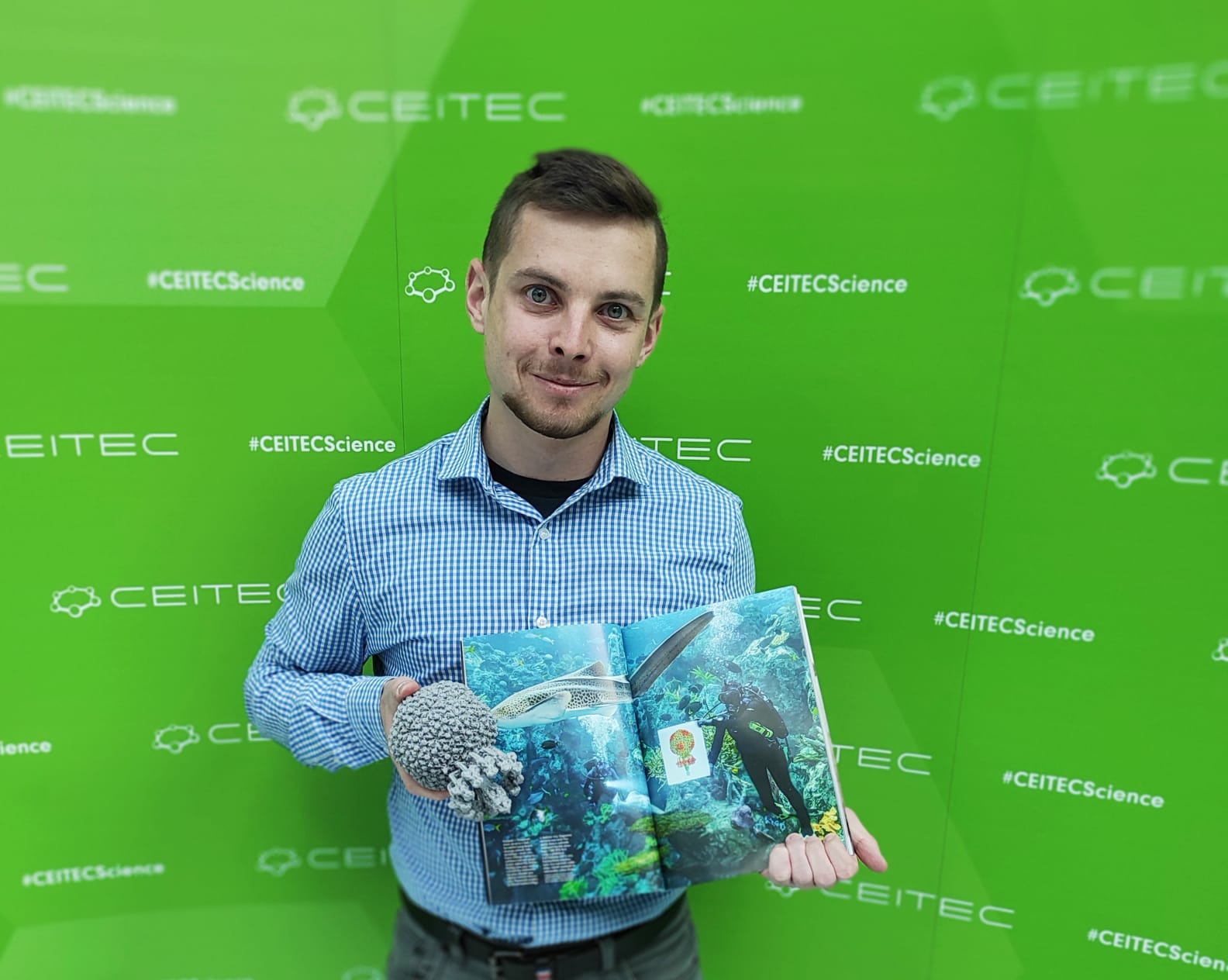 Despite the common knowledge that viruses are agents of disease, many of them actually bring adaptive benefits and life without them would not be possible. Being natural predators of bacteria, bacteriophages have long been considered as potential therapeutic agents that could be used against antibiotic resistant bacteria. Scientists in Pavel Plevka’s research group study three dimensional structures of viruses. These structures help scientists to explain the mechanism of how the bacteriophages attack and destroy bacteria. This type of information is key for the development of new therapies against antibiotic resistant bacteria. Researchers from Plevka’s group reconstructed entire structures of several bacteriophages, including the Phage P68, which has been pictured in the newest National Geographic issue. Plevka lab is one of the few research laboratories that characterized complex structure of entire bacteriophage, and this is why the group was approached by the National Geographic editors, who were interested in publishing the image.

Viruses also live in oceans, and as National Geographic explains, there are more viral particles in the oceans than stars observable in the universe. “As a zebra shark cruises by, a diver at the Aquarium of the Pacific in Long Beach, California, displays an image of a bacteriophage, a type of virus that infects bacteria. Harmless to plants and animals, bacteriophages are critical for healthy marine ecosystems. The Earth’s oceans teem with these and other viruses. The aquarium’s Tropical Reef Habitat and Soft Coral Garden hold 367,166 gallons of water, with an estimated 5.32 quadrillion viruses. If lined up side by side, those viruses would circle the Earth almost eight times,” says the description under Dominik Hrebik´s image of Phage P68 in National Geographic. “I am really happy that our phage structure made it into the National Geographic magazine and now even readers from outside of our scientific community from all over the world can find out about our research,” says the author of the phage structure, Dominik Hrebik. The editors decided to use the phage image in the ocean because bacteriophages are well known also for their ability to contribute to the stability of ocean microflora.

National Geographic is one of the most widely read magazines of all time. It is the world's premium destination for science, discovery, and adventure. The magazine uses the power of science, exploration, education, and storytelling to illuminate and protect the wonders of our world. For more than 130 years the National Geographic Society has defined some of the critical challenges of our time, driven new knowledge, advanced new solutions, and inspired positive transformative change. The magazine is well known for its distinctive appearance and dramatic photography. National Geographic is issued in nearly 40 local-language editions and has a total reach of more than 30 million readers.

Do you want to learn more about viruses? Read the newest National Geographic issue HERE.