Home About Us News Together in Nature Communications. Italian couple succeed with research on the capture of nanoplastics by MXene microrobots

News Research Press Releases
Together in Nature Communications. Italian couple succeed with research on the capture of nanoplastics by MXene microrobots

He's in physics, she's in chemistry. Each has a different focus, yet their scientific work has crossed. And met with success. CEITEC BUT husband and wife team Martina Ussia and Mario Urso have scored with their research on trapping and detecting nanoplastics using light-powered microrobots made from revolutionary MXene materials.

Instead of celebrating scientific brainstorming

"This is our biggest scientific achievement yet. It's a project that was born in the family. I was thinking about the design of the microrobots and my wife was thinking about the application. Then we put the two things together and came up with an amazing idea," says Mario. "Actually, we have to thank Martin Pumera, who made it possible for us to work together. In Italy, we were also doing science, but working in different institutes," adds Martina gratefully. But they say they have not celebrated their biggest success so far. As much as Martina would like to, Mario has already discussed possible follow-up avenues of research.

"It's not like we're leaving CEITEC and will stop talking about work. We are still living it. Even if we fall asleep and someone thinks of something, we have to discuss it right away," Martina explains. "We can do something different, we often have different opinions, we almost never agree, but together it just works," adds Mario. "That's true, even a shared scientific text is not written by one – each writes their own part, and if the other doesn't actually like it, they would write it differently," laughs Martina. But they don't question each other's expertise.

Mario came up with the impulse for the marriage project. He wanted to make microrobots to capture nanoplastics using MXene, which are 2D materials that are currently receiving a lot of attention due to their excellent properties – they exhibit high conductivity, chemical stability, thermal conductivity, and they are also hydrophilic, durable and compatible with the environment. Many researchers want to use these properties to produce a new generation of batteries, energy sources or hydrogen production. Mario saw potential in their multi-layered, accordion-like structure.

"The key problem with nanoplastics is their size. They are so small that they can pass through any sieve. It's not like in the newspapers where editors show pictures of seas or oceans polluted with plastic bags. These particles are so small that they easily disperse further through the ocean current. They don't stay on the bottom of the oceans, but basically contaminate everything. Plus, they absorb toxic pollutants, which adds to their danger. So the goal was to come up with microrobots that can trap small particles, plus swim in all directions in a controllable way. That's why I wanted to try MXene, which reminds me of a book in its structure. The nanoplastics could be trapped between the pages," explains Mario. Martina was able to turn his idea into reality. "If it wasn't for her competence, I would have been lost," he admits.

"When he came to me with this idea, I first struggled how to capture nanoplastics using the MXene materials he proposed. I chemically modified the materials, and Mario helped make them reactive to the sun. I then thought about how to detect the number of plastic particles. Because Mario has knowledge of electrochemistry, we also focused on monitoring nanoplastics in water in the article. So another benefit of our work is that when the light-driven microrobots capture nanoplastics, we can collect and extract them thanks to magnetic properties and electrochemical sensors," Martina explains. "This also means that in the future, we can go directly to a river or lake and see if there are nanoplastic particles there, thanks to the sensors," adds Mario.

Only in the lab so far

All experiments so far are limited to the lab. "We are trying to trap nanoplastics in small jars. We are getting close to absolutely capturing all the nanoplastic particles in a jar. However, with lake or sea water, we have to take other aspects into account. It is not just micro- and nanoplastics that are harmful there, there are also bacteria and various micro-organisms. And we don't know how our micro-machines will react to that. With the project, we have proven that MXene microrobots can help in solving the problem of nanoplastics, but there are still many challenges to face," concludes Mario.

"For example, we are now building on our joint research by adding more difficulty. By this I mean the ability of microrobots to capture other pollutants besides microplastics, specifically bacteria. We are therefore trying out other materials and different processing techniques," adds Martina, outlining the next steps in the couple's project. 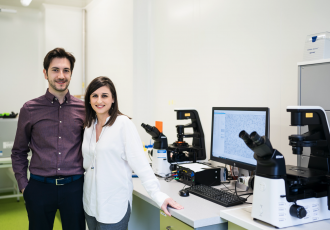 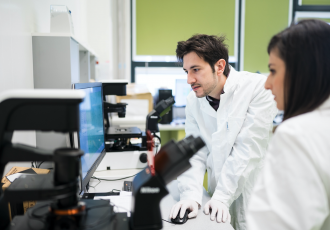