ProfileAbout UsNewsAdrian Krainer, the Scientist Who Brought Hope to Thousands of Children, Shared his Experience With Students
About Us

Adrian Krainer, the Scientist Who Brought Hope to Thousands of Children, Shared his Experience With Students

In the beginning of March, world-renowned biochemist, Adrian Krainer, shared the journey of his scientific career and his research results with students at CEITEC Masaryk University. He first spoke to PhD students about his career as part of the quarterly Life After PhD event series at CEITEC MU, and later delivered a scientific lecture at the popular Mendel Lectures Seminar series, organised by Masaryk University in the refectory of the Mendel Museum in Brno. 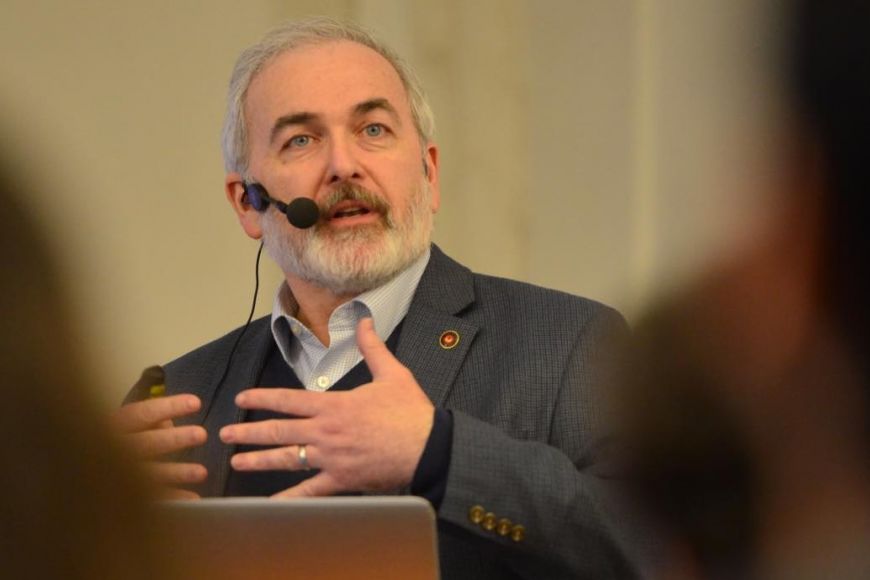 The famous biochemist assumes that the basis of his success in science comes from his stubbornness, determination, and good mentor. He is based at the Cold Spring Harbor Laboratory in the United States, and started working there right after his doctorate. His laboratory became famous mainly due to their discovery of the treatment for spinal muscular atrophy.

Krainer’s dream of having a career as a researcher started when he was in high school, when he was fascinated by Mendelian genetics. He was born in Uruguay, and there was no chance of pursuing a professional scientific career in research there during that time. However, thanks to his academic achievements and talent, he received a full scholarship to study biochemistry at Columbia University in New York.

“I didn't know what would happen next. It also mattered what results I would have. Fortunately, everything went well and I continued my doctoral studies at Harvard. I found very good mentors there who supported and encouraged me,” said Krainer.

Both Krainer and his wife Kate, who is also a scientist, and who joined him and CEITEC students at the Life After PhD event, agreed that the basis of success in science is stubbornness and determination. A good mentor is very important as well, as he or she can provide guidance, reassurance, and confidence.

During his doctoral studies, Krainer became interested in what was a relatively new subject at the time, pre-mRNA splicing. It is an intermediate step in the process of transferring the information stored in DNA to form specific proteins needed for cellular processes.

The genes stored in the DNA are first transcribed into an RNA molecule, which often also includes parts, so called introns, that do not carry the information needed to produce proteins. Pre-mRNA splicing is the process that removes these introns and joints the protein coding regions together. The advantage of this mechanism is the fact that multiple types of protein molecules can be generated from a single gene.

When Krainer presented his scientific work as a young scientist for the first time publicly at a conference at Cold Spring Harbor laboratories, he was noticed by the Nobel Prize winner, Richard John Roberts, who discovered the mRNA splicing principle. He proposed to Adrian Krainer to continue with the mRNA (messenger RNA) splicing research in his laboratory as a PhD topic. After his doctorate, Krainer moved to the CSHL, a prestigious institute, where he still works today. “It was a great chance to continue researching what I started during my doctorate, to try new approaches, and to explore this mechanism much further. I could do what I really enjoyed,” explained Krainer.

In his laboratory, he focuses mainly on the basic research of mRNA splicing mechanisms and their influence on various genetic diseases and cancer. He was largely involved in research on the molecular mechanisms that cause spinal muscular atrophy (SMA). SMA is one of the most common hereditary diseases, as it occurs in about one out of 6000 births. This neuromuscular disorder causes gradual muscle weakness, thereby reducing the ability to move. In the acute form of this disease, children often do not survive their first two years of life.

Patients with this disease carry a mutation in the SMN1 gene responsible for motor neuron activity. Patients do not produce enough protein to transfer the signal through nerve cells to the muscles. However, humans have a similar SMN2 gene in the genome, but this gene unfortunately does not produce a sufficient amount of surrogate protein, also due to a different pattern in mRNA splicing.

“We started thinking about whether this could be corrected somehow, and we managed to find a way to correct mRNA splicing. Over time, we designed a drug in collaboration with a pharmaceutical company. We performed tests on mouse models in our laboratory and saw that the drug was working. After that, clinical trials were conducted, where our drug was repeatedly administered to the patients’ spines. Early administration can help to prevent onset of the disease. Otherwise, it slows down its development and helps to reverse patients’ conditions and to improve their lives,” Krainer described his path to the discovery of a breakthrough medicine called Spinraza.

Drug Development Is a Long-Term Process

It sounds simple, but it was a very long and complicated process. Scientists at the Krainer Laboratory began doing this research in 2000. Four years later, Krainer was approached by a colleague from the pharmaceutical industry, and co-author of the final drug, Frank Bennett. Bennett noticed Krainer´s publication and patent application. He recognised the potential of his research, but the drug was not created until 2008. Further tests and clinical trials lasted until 2016. "It seems like a very long time, but compared to the average drug discovery time, this was actually quite fast," Krainer explained.

Technology transfer experts helped him with the patenting process. “When I first saw a patent application, I wanted to kill myself. The patent layers use a different language, and such an application is quite a difficult thing for us scientists,” he said, while laughing. Krainer holds seven US patents and over 80 foreign patents, which, he says, protect about four to five of his major discoveries.

Spinal muscular atrophy research was not just a job for him, but a deep human experience. “During the research, I started to attend various meetings associated with the disease, where I met scientists and doctors, and patients with their families. As a result, I became aware of the importance of my work, which can be very motivating for a scientist.  I realised that we are not just solving questions of science, but are on a search for real-life solutions,” Krainer added.

Over 10,000 people have had already benefited from his drug, Spinraza. One of them was Boženka, the first patient in the Czech Republic to receive Spinraza. You can watch Adrian Krainer and Boženka on the popular Czech Television show, Hyde Park Civilization.