First Japan, then next stop Brno. The Japanese multinational concern Rigaku chose CEITEC BUT’s laboratory for the first foreign installation of their unique X-ray computed nanotomograph. Thanks to their results so far in the area of X-ray computed nano and microtomography the Japanese experts decided to also deepen their long-term cooperation with CEITEC BUT in research and development. 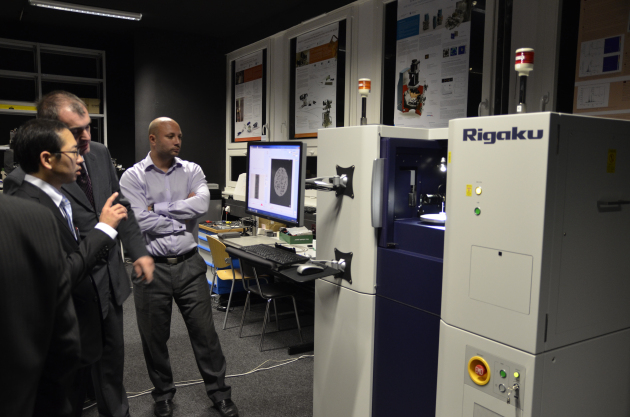 Experts from Rigaku have already been cooperating for a while with the microtomography laboratory of the Materials Characterization and Advanced Coatings research group from CEITEC BUT and on the basis of this positive experience they want to continue. This group of scientists from CEITEC BUT, led by Professor Jozef Kaiser, have already won a place among the best in the world with their results achieved in the field of tomography and so the decision by a world leader in the production of tomographic devices only provides further confirmation of this.

On the occasion of the installation of the nanotomography station on Wednesday October 29 a contract on strategic cooperation was signed in Brno by the rector of BUT, Professor Petr Štěpánek, the director of CEITEC BUT, Professor Radimír Vrba, the director of the Rigaku Corporation X-ray Research Laboratory, Dr. Kazuhiko Omote and Rigaku Innovative Technologies Europe s.r.o. executive, Assoc. Prof. Ladislav Pína. “Since 2012 we have had at our disposal an X-ray microtomography station, thanks to which we have gained strategic partners and been able to expand cooperation with an important partner of CEITEC – the Italian Elettra synchrotron in Trieste,” explained Radimír Vrba, director of CEITEC BUT.“ The station is being used intensively both for basic and applied research in the development and utilisation of computed tomography and is bringing us other joint grant projects as well as contracted research projects,” said Vrba and added: “The installation of the nanotomography station opens up for us new opportunities for cooperation as well as financially interesting projects, which will be crucial for the sustainability period of CEITEC BUT.”

Nanotomography works by first sending high energy X-rays through the investigated subject, and then by complicated mathematical processing producing a 3D tomographic image. Compared to a microtomography, the installed device is capable of substantially higher resolution (approximately five times better), with voxels (like 3D pixels) reaching limiting values down to 270 nanometres. The resolution of the nanotomography station is sufficient for example to investigate a cell (normally the size of a cell is in the range of micrometres, with for example the bacterium E. coli being 2–3 micrometres long). One of the first planned applications of the station is the study of absorbable porous carriers for cells and drugs – so-called immobilised cell implants, which were developed within CEITEC BUT on a biopolymer composite base for the treatment of bone or cartilage by the tissue engineering method. The nanotomography station will also be useful for the study of the structure of light materials, particularly all types of plastics and their mixtures.  It can also be used to study composites (reinforced plastics - laminates for industrial, agricultural and even sports applications) and nanocomposites. The nanotomography station will however primarily be used for the study of biological materials, whether biominerals (teeth, pieces of kidney stones, bone fragments and implants), or soft tissue such as butterfly wings or ant legs.

Developing close contacts with these Japanese experts is not the only success of Professor Kaiser’s group in the area of commercial cooperation.  Another team in his group managed to construct and patent a unique machine, under the working name rLIBS, for the remote elemental analysis of samples. “Put very simply, it now is not a problem to analyse the composition and thus the state of possible corrosion of a bridge, without having to remove a sample. All you have to do is place the instrument on the ground, aim it at the bridge, and it carries out its analysis at a distance using a laser beam,” said Jozef Kaiser, who was also one of the moving spirits behind this device. “With information gained this way we do not have to go to the laboratory, because the instrument can process data instantly on site via a link to a tablet or notebook,” added Kaiser. To commercialise this technology a little while ago CEITEC BUT scientists founded a start-up company called AtomTrace s.r.o.

“Not just these, but also other results from CEITEC BUT scientists show that they are prepared for the sustainability period and are looking for sources of financing other than from the state budget” stated Brno University of Technology Rector Petr Štěpánek.