Home About Us News CEITEC CELEBRATES 10TH ANNIVERSARY: From an Ambitious Dream to a Successful Research Centre With International Reputation

Exactly 10 years ago, on June 6th, 2011, the Central European Institute of Technology (CEITEC) project was officially approved. Some years ago, a group of science enthusiasts from Brno had the ambitious dream to establish a scientific multidisciplinary centre of excellence, which would connect the best scientific teams from six major Brno-based universities and research institutions and which would be able to attract foreign scientific talents to Brno. When the project application was submitted 11 years ago, CEITEC was just a large pile of papers containing a well-elaborated plan of the local scientific community. Today, CEITEC, with its modern buildings and state-of-the-art laboratories, is an important research centre in the South Moravian region, and is gradually becoming a respected player at the international level. 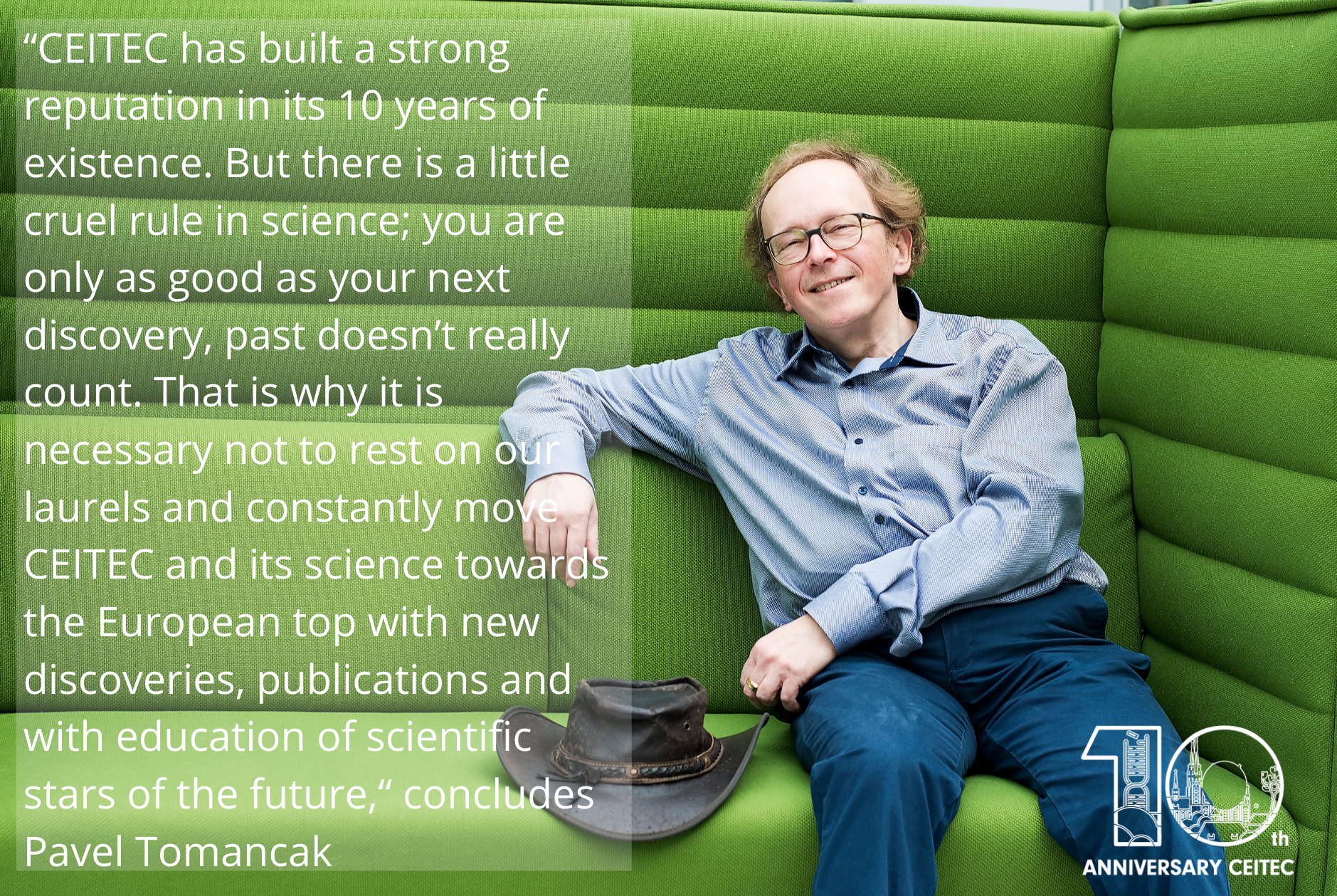 The progressive research institute has managed to build a strong brand, which is resonating throughout Europe. In only 10 years, CEITEC has become known for its high-quality, socially relevant basic research, but also thanks to its professional institutional management, emphasis on the quality of the working environment and its determination to constantly learn and improve. Once only a dream, CEITEC gradually developed itself into a successful science centre with a steadily growing international reputation.

CEITEC is a young and dynamic interdisciplinary research centre focused on life sciences, advanced materials and nanotechnologies. The multidisciplinary nature of the CEITEC institute and the extent to which the fields of life sciences, advanced materials, and nanotechnologies are integrated make it the first research centre of its kind in the Czech Republic. Researchers at CEITEC work in eight areas of research: advanced nano and microtechnology, advanced materials, technical cybernetics, instrumentation and systems integration, structural biology, genomics and proteomics of plant systems, molecular medicine, brain and human mind research and molecular veterinary medicine.

Today, the CEITEC consortium employs more than 1,400 people from more than 45 countries, who are working on about 300 currently implemented scientific projects. Every year, CEITEC scientists publish around 500 professional publications, more than half of which are in journals belonging to the 25% of the best scientific periodicals in the world.

Local research teams actively cooperate with prestigious universities and research institutes from around the world and push the boundaries of human knowledge in areas that directly affect the quality of human life and health. Scientists at CEITEC work with the technologies of the future, such as modern methods of genome editing, molecular machines, and conduct sophisticated investigations of structural properties of viruses and bacteria down to the atomic level. Their research results help to improve the diagnosis and treatment of cancer, Alzheimer's disease, tick-borne encephalitis and many other diseases.

Check on the #CEITEC10 celebrations!

The success of the centre directly depends on the highly skilled people with foreign experience who work here, and on its state-of-the-art scientific equipment, which is hard to find within a single organization. CEITEC provides open access to 12 core facilities equipped with the latest technologies. Top instruments are accessible not only to researchers from the CEITEC, but also to external users from the academic and private sectors, with the opportunity to take advantage of the unique expertise that the heads of shared laboratories possess. The state-of-the-art equipment would be useless without the highly skilled and motivated people employed by CEITEC.

In order to maintain high international-quality standards in research, CEITEC is regularly evaluated by the International Scientific Advisory Board (ISAB). During a recent evaluation by an expert panel of the Ministry of Education, Youth and Sports, the institute received the highest A1 grade (final evaluation of the NPUII project), which confirms the centre performs very well, even when compared internationally. The expert body highly valued the balanced excellence scientifically and institutionally. This result is an honour for the effort of the scientific team, but also the administrative team, who support scientists in their everyday work.

Research teams from CEITEC are repeatedly succeeding in national and international grant competitions, and thus obtain necessary research funding. The scientists are aware of their social responsibility and are also engaged in voluntary activities such as popularization of science. They regularly appear in the Czech media and inform the general public about their latest discoveries. This year, CEITEC will represent the Czech Republic and Czech science even at the EXPO 2021 world exhibition in Dubai, together with the South Moravian biotechnology company Photon System Instruments.

CEITEC is also committed to educating a new generation of internationally competitive scientists, because today's society simply cannot exist without science, as the current coronavirus pandemic has shown. PhD students studying in the international CEITEC PhD School have access to modern laboratories and to education in the interdisciplinary scientific community in English. The PhD school is based on the so-called "Principles for Innovative Doctoral Training"  issued by the European Union in order to unify the quality of European doctoral studies. Students in this unique doctoral program receive mentoring support and are systematically guided to the successful and timely completion of doctoral studies. This approach is bearing fruit, and doctoral students at CEITEC can be proud of their first-author publications in high-impact journals, victories in national as well as international competitions, and prestigious scholarships.

Brno-based CEITEC is a great example of a well-thought-out plan combined with a team of competent and determined people who managed to turn an ambitious dream of a scientific excellence centre into reality in only 10 years. But the great ambitions of CEITEC does not end here. The centre recently approved a new strategy that seeks to build on the institute's current strengths and combine them with regional opportunities. The local ecosystem is home to several big science and technology companies, which are responsible for more than a third of the world's electron microscope production. CEITEC understands the needs of world-class science as well as the regional opportunities, and tries to use them strategically. The research centre strives to become a leading European basic research institute in the field of life and materials sciences, and one that is famous for its scientific discoveries.

“CEITEC has built a strong reputation in its 10 years of existence. But there is a little cruel rule in science; you are only as good as your next discovery, past doesn’t really count. That is why it is necessary not to rest on our laurels and constantly move CEITEC and its science towards the European top with new discoveries, publications and with education of scientific stars of the future,“ concludes Pavel Tomancak, director of the CEITEC consortium.