ProfileAbout UsEventsChirally coupled magnets
About Us 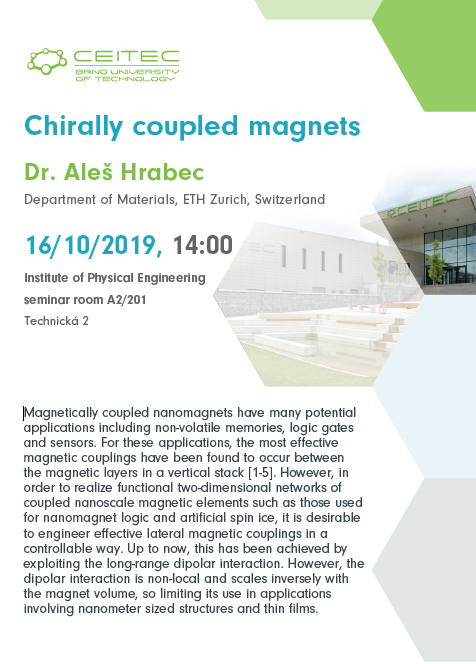 Magnetically coupled nanomagnets have many potential applications including non-volatile memories, logic gates and sensors. For these applications, the most effective magnetic couplings have been found to occur between the magnetic layers in a vertical stack [1-5]. However, in order to realize functional two-dimensional networks of coupled nanoscale magnetic elements such as those used for nanomagnet logic and artificial spin ice, it is desirable to engineer effective lateral magnetic couplings in a controllable way. Up to now, this has been achieved by exploiting the long-range dipolar interaction. However, the dipolar interaction is non-local and scales inversely with the magnet volume, so limiting its use in applications involving nanometer sized structures and thin films.

I will show that we are able to develop an alternative method to control the lateral coupling between adjacent magnetic nanostructures [6] based on the interfacial Dzyaloshinskii-Moriya interaction (DMI) as shown in Fig. 1a. In particular, we have patterned regions with in-plane (IP) and out-of-plane (OOP) magnetic anisotropy in a magnetic element using selective oxidation of Pt/Co/Al films (Fig. 1b), and the magnetization in the OOP and IP parts of the islands are coupled via DMI arising from the Pt underlayer. This results in chirally coupled magnetization so that when the IP region is set to point to the right (→) with an in-plane magnetic field, the OOP regions on the left and right of the IP region point down (⊗) and up (⊙), giving either ⊗→ or →⊙ configurations. We have exploited this concept for various applications, which make use of the fact that the chiral coupling is much stronger than the dipolar coupling. For example, we have created stable synthetic lateral antiferromagnets, skyrmions with different numbers and artificial spin ices based on a square lattice and kagome lattice. In addition, we have demonstrated field-free current-induced switching between multistate magnetic configurations in the chirally coupled thin-film nanomagnets via spin-orbit torques.