Research focusses on structure-function studies of proteins which participate in oligo-saccharide syntheses (glycosyltransferases), or specific recognition (lectins). Carbohydrates are essential for life and, in addition to their conventional role as structural and energy storage components, they play crucial roles in many recognition events. Specific recognition of glycoconjugates is an important event in biological systems and participates in numerous physiological and pathophysiological processes including cell signalling, differentiation, fertilization, infl ammatory response, as well as in cancerogenesis or pathogen-cell adhesion and recognition. The multiple roles of carbohydrates arise from the stability and the stereochemical diversity of glycosidic bonds.

The life cycles of pathogenic bacteria, fungi and viruses require the specific recognition of host tissue for adhesion and subsequent invasion. A common strategy often used by pathogens involves binding to the host glycoconjugates through sugar-binding proteins that can display exquisite specificity for the target tissue. For many pathogenic organisms, the ability to adhere to host tissues is essential to initiate an infection. Oligosaccharide-mediated recognition and adhesion are, for example, key points in the early steps of P. aeruginosa infection because they are followed by processes such as chronic colonization and biofilm formation together with alginate production under the control of quorum sensing. These last adaptive changes by the bacteria make their eradication difficult because, when in the biofilm phenotype, the bacteria become resistant to antibiotic drugs. This brings new challenges into the therapeutical area because the inhibition of protein-carbohydrate interaction could lead to the inhibition of pathogen recognition and adhesion to the host cell.

One of the groups of proteins we are interested in is a group of lectins from human opportunistic pathogens, such as Pseudomonas aeruginosa, Burkholderia cepacia complex, Aspergillus fumigatus, etc. These organisms are usually widely spread around the population and are not dangerous to healthy individuals. On the other hand, they become highly virulent in contact with immunocompromised patients. Infections developed are associated with high morbidity and mortality in the infected people, especially in individuals under mechanical ventilation and in patients suffering from cystic fibrosis. 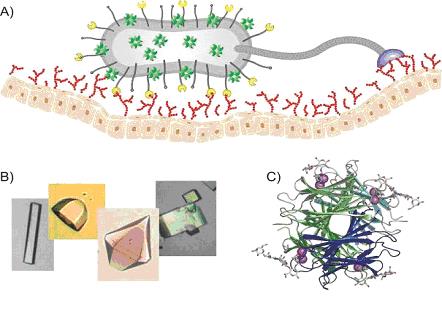 A) Schematic representation of carbohydrate-binding proteins at the top of pili and flagella responsible for the attachment of the pathogenic bacteria to the epitelial host cell carbohydrates.
B) Crystals of several protein/carbohydrate complexes allowing their structure determination using X-ray.
C) X-ray structure of PA-IIL lectin from Pseudomonas aeruginosa complexed with sugar epitope LNnFP-V (PDB 1W8F).

We use a multidisciplinary approach to study the recognition and adhesion phenomena of pathogens including bacteria, viruses, and fungi to human tissue. We have been identifying new potential protein targets using bioinformatics tools, and they have been prepared in recombinant form using molecular biology approaches. The complementary techniques of binding experiments, isothermal titration microcalorimetry, surface plasmon resonance and high resolution X-ray crystallography are used to decipher the thermodynamic and structural basis for the unusually high-affinity binding of lectins from pathogens to their host carbohydrates. In addition, site-directed mutagenesis in combination with structural and functional studies allow us to understand the roles of particular amino acids in the fine definition of sugar specificity and preference.

Twinning Projects to Broaden Cooperation with the Europe’s Greatest…