Molecular biologist Kateřina Litzmanova (maiden name Musilova) from the Marek Mraz Research Group from CEITEC MU received the Masaryk University Rector's Award. The young scientist was awarded for her dissertation project and resulting publications, which she produced during her doctoral studies at the Department of Internal Haematology and Oncology at the University Hospital Brno, Masaryk University Faculty of Medicine, and at the CEITEC MU research institute. Katerina Litzmanova focused her research mainly on the relatively still unknown regulatory role of non-coding microRNA molecules on the development of follicular lymphoma. Her new findings about the role of the specific microRNA molecule called miR-150 may help with the timely identification of patients with the most aggressive course of this disease. The award ceremony took place at the beginning of the academic year on 8 October 2020 at the Masaryk University Rector's office. 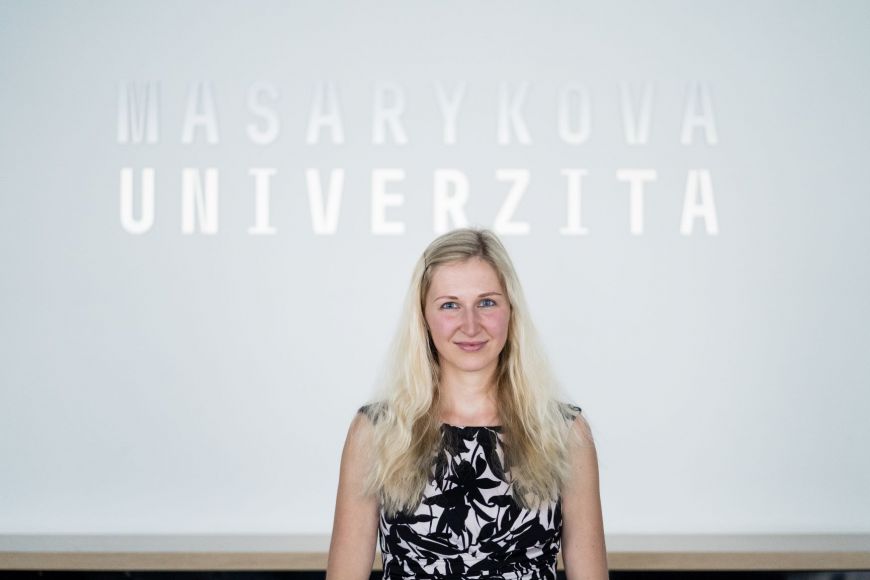 Lymphomas belong to the group of cancers affecting lymphocytes, which are one of the body’s main types of cells in the immune system. Follicular lymphoma is the most common type of slow growing diseases in adults, and originates from B lymphocytes (also called B-cells), which normally produce antibodies to protect against infections. The main symptom of this disease is a long-lasting enlargement of the lymph nodes, usually without further problems. Fatigue, weight loss, and unexplained fever may also occur later. Although this type of lymphoma responds relatively well to treatment, it still remains as an incurable disease. During the course of the disease, there can be repeated relapses, which may lead to the development of a resistant tumour or to its transformation into a more aggressive type of lymphoma, which is often fatal. In her research, Katerina Litzmanova tried to understand what leads to this aggressive transformation, in order to timely predict this unfavourable development of follicular lymphoma. She mainly focused on the relatively unknown topic of microRNA molecules in the development of follicular lymphoma. Understanding the mechanisms responsible for the aggressive behaviour of lymphoma could be essential for the development of new treatment strategies, which could provide hope, particularly for high-risk patients.

"For the first time, we were able to identify microRNA molecules involved in the transformation of low-aggressive follicular lymphoma into highly aggressive diffuse large B-cell lymphoma and elucidate the key role of a specific microRNA called miR-150 in this process and in the aggressive behaviour of this lymphoma in general," explained Katerina Litzmanova. The results of Litzmanova and her colleagues’ work significantly deepened the knowledge about the molecular nature of this type of cancer. Additionally, they contributed to the understanding of the development of follicular lymphoma, and this has the potential to be transferred into clinical practice. "MicroRNA molecules are stable even in commonly available tissue, so quantification of miR-150 molecules could serve in clinical practice as an easily detectable biomarker, and thus help to identify patients with the most aggressive course of the disease in time," added Litzmanova. She demonstrated that miR-150 levels fall during the transformation of follicular lymphoma, resulting in increased FOXP1 protein levels, faster tumour cell division, increased risk of further disease progression, and overall shortened patient survival rates.

The research team used common laboratory methods, as well as very specific modern research methods. The potential for clinical use means that the simple detection of miR-150 levels in FFPE tissue (tissue fixed with formalin and embedded in paraffin blocks) is crucial. The method must be easily executable in laboratories performing routine histological examinations, so that the studied molecule miR-150 could serve as an affordable and easily detectable prognostic biomarker in patients with follicular lymphoma.

The research was carried out in cooperation with many domestic and international institutions, and took more than 6 years to complete. At the very beginning, the Marek Mraz Research Group began a key collaboration with Associate Professor Janikova from the Department of Internal Hematology and Oncology of the University Hospital Brno and Masaryk University’s Faculty of Medicine. The collaboration was extended to Olomouc Faculty Hospital, the University of Rochester in New York (USA), the University of Vienna in Austria, and the famous Mayo Clinic in Rochester (USA). "The help and support of all members of our research team and other colleagues from CEITEC and the Center for Molecular Biology and Gene Therapy was very important," stated the awarded scientist.

Last year, Kateřina Litzmanova received an award from the Purkyn Foundation for the 2018 publication with the highest impact factor (IF) for her research results that were published in the scientific journal, Blood. Litzmanova and corresponding author, Marek Mraz, received the same award in 2015 for a review article published in the prestigious journal, Leukemia, published by Nature. The young molecular biologist and her colleagues from the Marek Mraz Research Group also received an award from the Czech Haematological Society for the best original scientific work in the field of haematology in 2018. Kateřina Litzmanova has been studying lymphoma since her Bachelor's Degree and achieved her first interesting results during her Master's Degree. Her family experience with oncological diseases attracted her to cancer research. More information about the scientific results of the research can be found in Katerina Litzmanova´s key article in the journal, Blood, and in the review article in Leukemia magazine from the Nature publishing house.