The biology of malignancies derived from „mature“ B cells is largely driven by two molecular pathways that are crucial for the biology of B cells (i) deregulation of B cell receptor signalling, (ii) microenvironment interactions in lymph nodes and bone marrow (reviewed in Seda and Mraz, EJH, 2014)1. These events are interconnected since the normal and malignant B cells are stimulated by antigens and antigen-presenting cells in the context of their microenvironment. Activation of both pathways leads to up-regulation of numerous anti-apoptotic/pro-proliferative molecules and cell adhesion leads to enhanced receptiveness to BCR-signalling and vice versa.  It has been shown that these pathways are both important in the onset, progression and resistance of B cell malignancies like chronic lymphocytic leukemia (CLL), follicular lymphoma (FL), diffuse large B cell lymphoma (DLBCL), and mantel cell lymphoma. Targeting microenvironmental interactions in immune niches is currently one of the most promising therapeutic approaches and an important part of the mechanism of action of BCR-inhibitors like ibrutinib or idelalisib (FIG. 1).  However, the mechanisms for BCR (de)regulation and mechanism of action of BCR-inhibitors are largely unknown (reviewed in Seda and Mraz, EJH, 2014). Similarly, the role of miRNAs in the regulation of the complex BCR signalling cascade remains one of the highly interesting, yet poorly explored questions, in the biology of normal and malignant B cells. 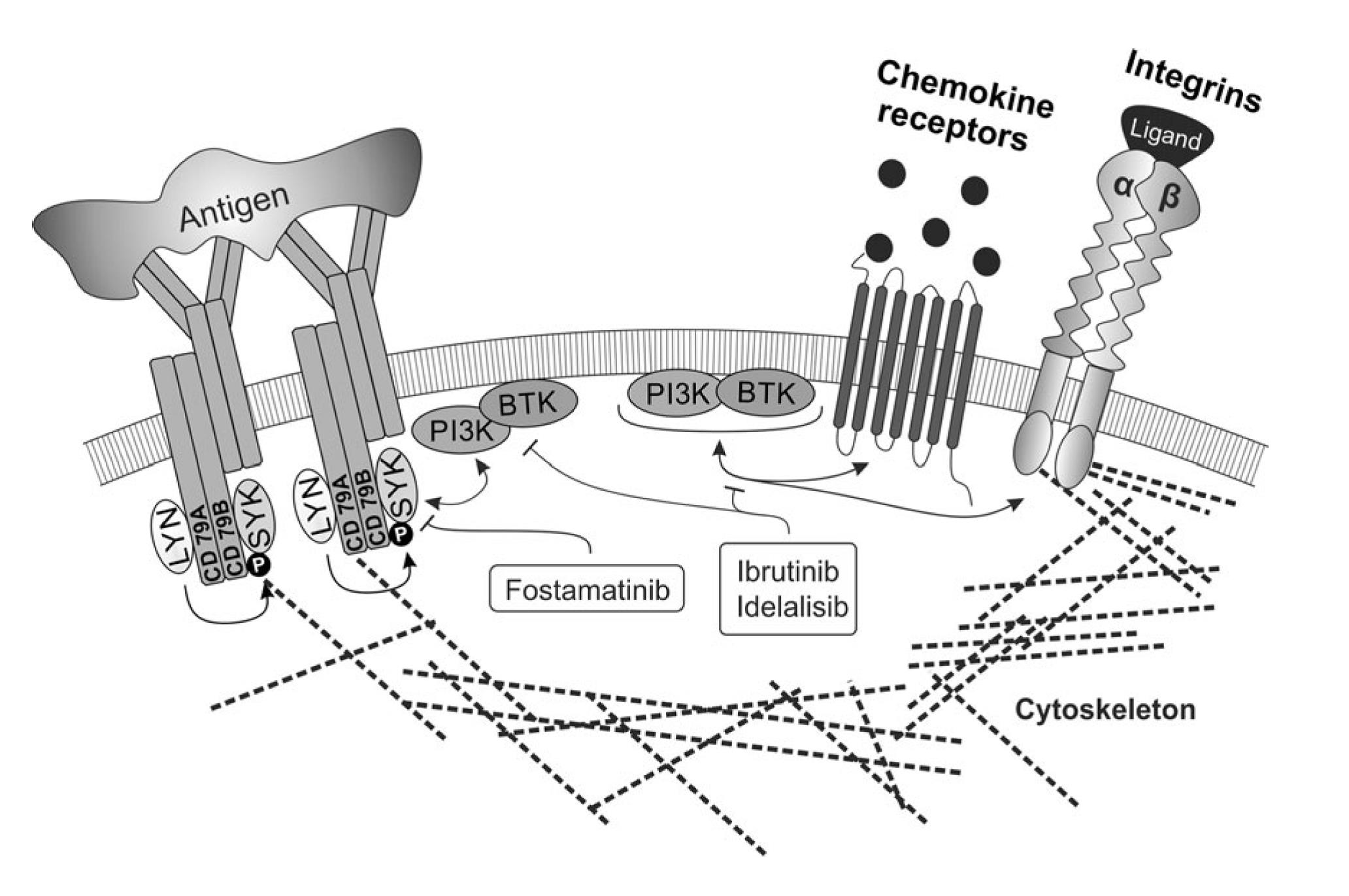 FIG. 1. The crosstalk of BCR signalling and adhesion/migration in B cells, and their therapeutic targeting (Seda and Mraz, EJH, 2014)1

We study molecular pathways involved in microenvironmental interactions in B cell malignancies, and specifically focus on those whose targeting could potentially mimic or synergize with BCR-inhibitors. We mainly focus on “indolent” B cell malignancies (CLL and FL), where there is an unmet clinical need to identify patients with aggressive disease (especially a subset of ~20% of FL patients with unfavorable prognosis) that can benefit from novel and expensive therapeutic approaches, and to describe predictors of response to BCR-inhibitors. We have shown that microRNAs (miRNAs) play a key role in the regulation of microenvironmental interactions, and their expression can be used as prognostic/predictive biomarkers or therapeutically exploited.The discovery of non-coding RNAs, particularly miRNAs, changed the understanding of the biology of normal and malignant B cell and regulation of cell physiology in general. MicroRNAs constitute about 5% of predicted genes in the genome and a single miRNA regulates, based on an incomplete complementarity, many mRNAs which has important consequences for gene regulation. Identifying miRNA targets is not easy since a large number of genes can be influenced by miRNA levels and this is context dependent. MicroRNAs can act as a simple negative regulation of a target mRNA, but it seems that a common scenario is their participation in positive/negative feedback/feed-forward regulatory loops (see Musilova and Mraz, Leukemia, 2015) (FIG. 2). Chronic lymphocytic leukemia (CLL) serves as a prototype malignancy to study the role of miRNAs since it was also the very first human disease associated with deregulation of miRNA expression 8. Several studies including ours have identified ~25 miRNAs differentially expressed between indolent versus aggressive disease (reviewed in Mraz et al., 2009, 2013), including their contribution to p53-pathway deregulation in CLL (Mraz et al., Leukemia, 2009, Mraz et al., Blood, 2012, Mraz et al., Leuk Lymph, 2009). Importantly, we have shown for the first time that miRNAs, namely miR-150, can regulate BCR signalling by directly affecting GAB1 and FOXP1 levels in malignant and normal B cells (Mraz et al., Blood, 2014). We have also shown that miRNAs can target the negative regulators of BCR signalling like SHIP-1 phosphatase (Cui et al., Blood, 2014).

We aim to further describe the role of non-coding RNAs and their targets in the regulation of microenvironmental interactions like adhesion and BCR signalling, and to use this therapeutically. 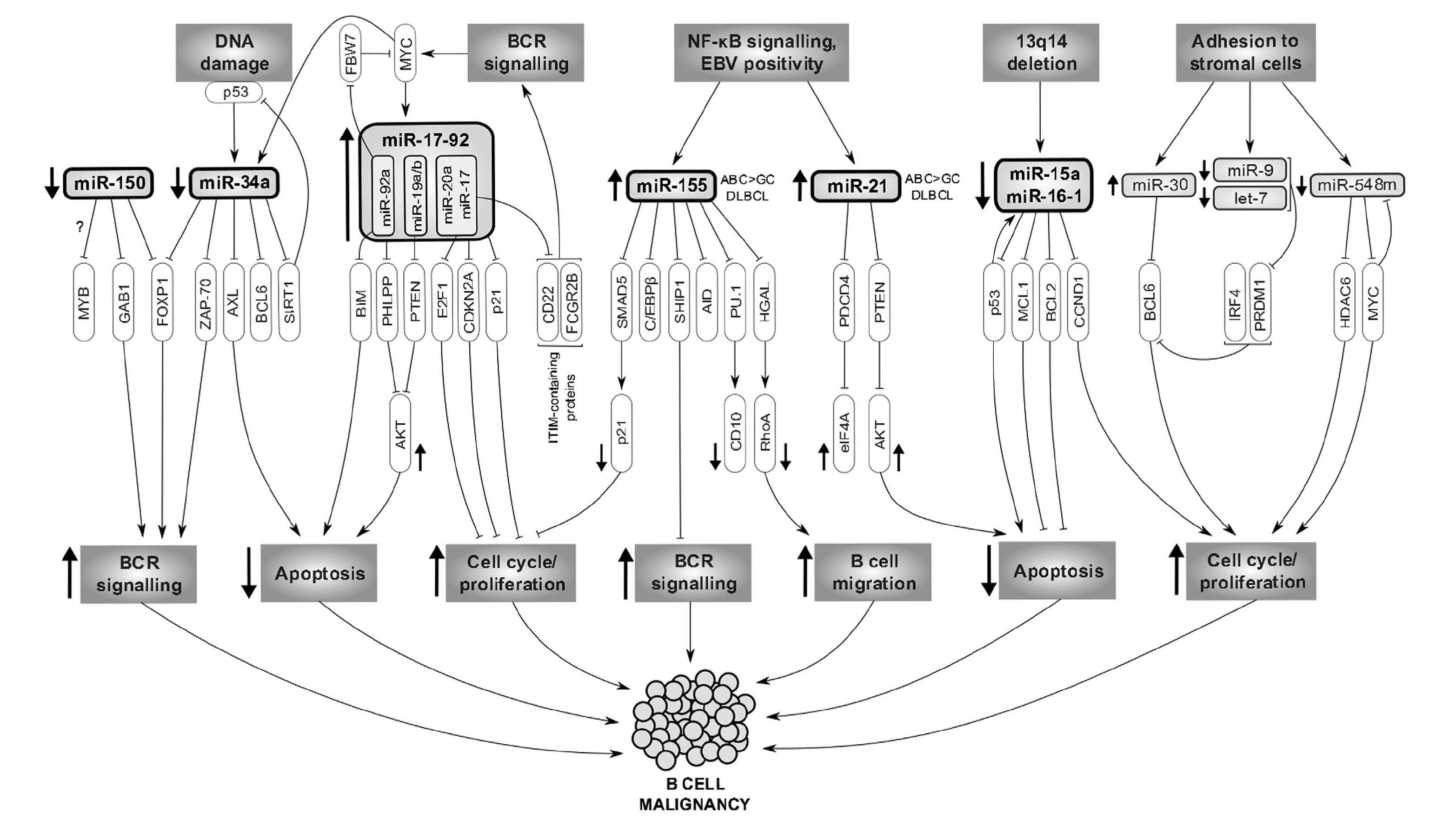 Fig. 2. The contribution of altered miRNA expression to the molecular pathogenesis of B-cell lymphomas. The first row represents the upstream regulation of miRNAs, followed by the primary (third row) and secondary (fourth row) miRNA targets. The last row shows the overall impact of miRNA deregulation on the B-NHL biology (Musilova and Mraz, Leukemia, 2015).