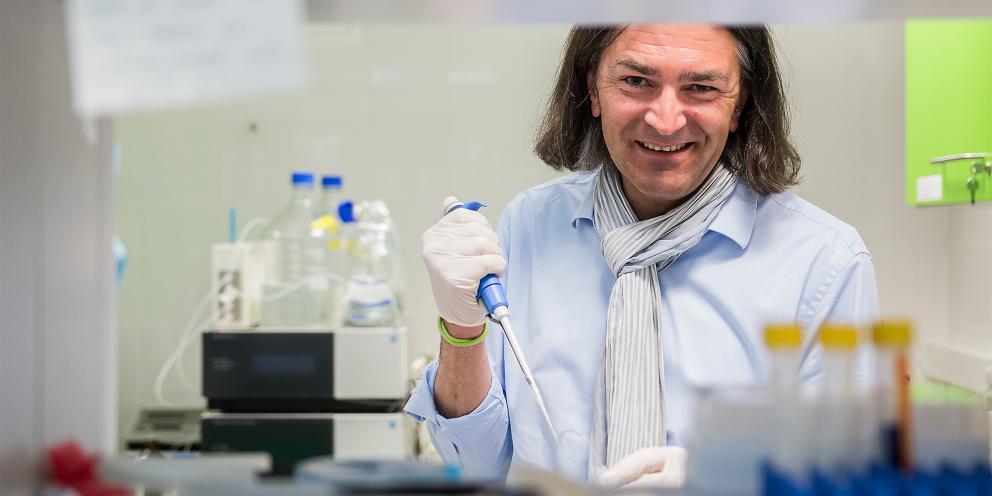 Cystic Fibrosis is one of the most frequent genetic diseases with 4 in 100 people carrying at least one mutation. If two carriers happen to mate, their off-spring has a 25% chance of developing cystic fibrosis with strongly impaired lung function and shortened life span. Severe forms of cystic fibrosis are associated with a missplicing of the pre-mRNA coding for an ion channel called CFTR. The molecular basis of this missplicing event is poorly understood and thus hampers development of future therapies.

In the EU-funded ASCE (Aberrant Splicing of CFTR Exon 9) project, researchers from CEITEC MU determine the molecular details of this aberrant splicing event for the first time. They solved the structure of a key protein named TDP-43, bound to the aberrant splice site pre-mRNA using NMR spectroscopy in combination with other sophisticated, biophysical techniques available at CEITEC MU (NMR, SAXS, ITC, FA).

„Determining the structure of this large RNA-protein complex was a true challenge but gave great insights into the molecular basis of this disease-causing missplicing event. We found out that two copies of TDP-43 bind to UG-repeats in the 3‘ splice site of the CFTR pre-mRNA. Each protein copy reads out the RNA sequence with two RNA-binding modules termed RRMs. In addition, TDP-43 binding to the pre-mRNA creates two new interaction surfaces, one between the two RRMs of each protein copy and one between the two protein copies. Disruption of these interfaces with protein mutations restores splicing of CFTR exon 9 in vivo and thus both interactions represent valuable drug targets. Using a fluorescence-based binding assay, we now set out to screen a library of 90.000 compounds to obtain small chemicals which disrupt the interaction of TDP-43 with the 3‘ splice site of the CFTR pre-mRNA,“ explains Peter J. Lukavsky, Research Group Leader at CEITEC MU. Targeting interactions of TDP-43 with RNA might lead to development of effective therapies not only for severe forms of cystic fibrosis but also several neurodegenerative which TDP-43 is linked to.

„Once we have found effective inhibitors of TDP-43 interactions with RNA, we will validate the compounds with additional in vitro and in vivo assays and determine the structures of the TDP-43 – inhibitor complexes to lay a foundation for rational drug design,“ adds Peter. Currently, the scientists assemble the entire aberrant 3‘ splice site with additional protein partners bound for future structural studies. With this, they envision to reveal further molecular insights into aberrant CFTR exon 9 splicing.