Masaryk University, in collaboration with the Masaryk Memorial Cancer Institute and BioVendor, signed a license agreement for a patented diagnostic kit developed by Ondrej Slaby from CEITEC MU and his team. The new test kit should be available to doctors within the next two years. 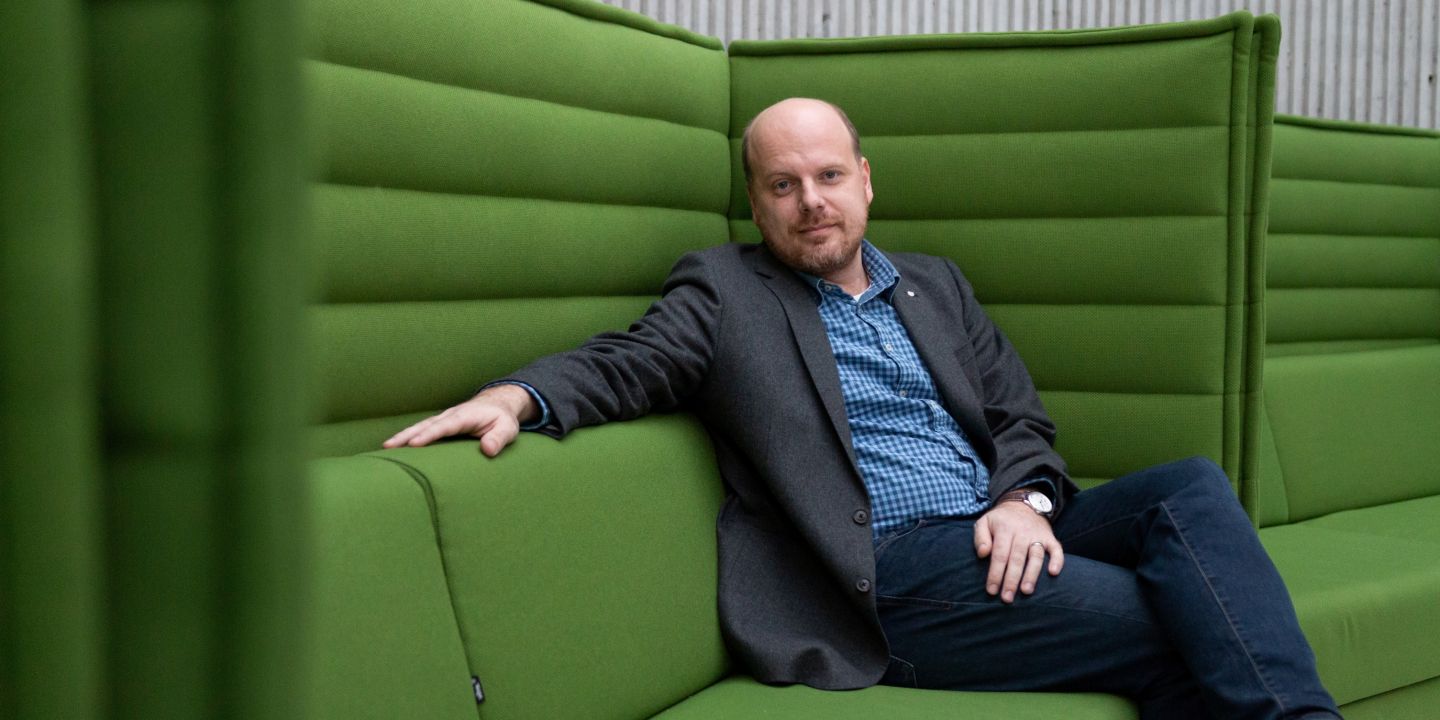 That is why the Czech Republic runs a large-scale screening programme, which regularly checks people over 50 years of age to detect if they have developed colon cancer or a precancerous form of the disease. Early removal of the precancerous form of tumours has led to the reduction of the number of new cases of colorectal cancer in recent years. According to Ondrej Slaby, the number of patients in which a malignant tumour was caught at an early stage is, unfortunately, still not satisfactory.  Participation of the population in the screening program is still rather low - only about thirty percent of the target population gets tested, which is not satisfactory.

One of the reasons why people do not cooperate and do not take this basic test for hidden bleeding in the stool, is the general resistance to dealing with the stool. Unfortunately, tumours that manifest themselves in this way are often already at an advanced stage. Another fact that further complicates this issue is that a colonoscopy examination follows after a positive test result. A colonoscopy is an unpleasant examination, and in a number of cases, ends without any findings. "If we could recognize the early stages of this disease from the blood, allowing it to be properly detected, we could help more patients, because colorectal cancer in the early stages is fully curable," said Slaby. 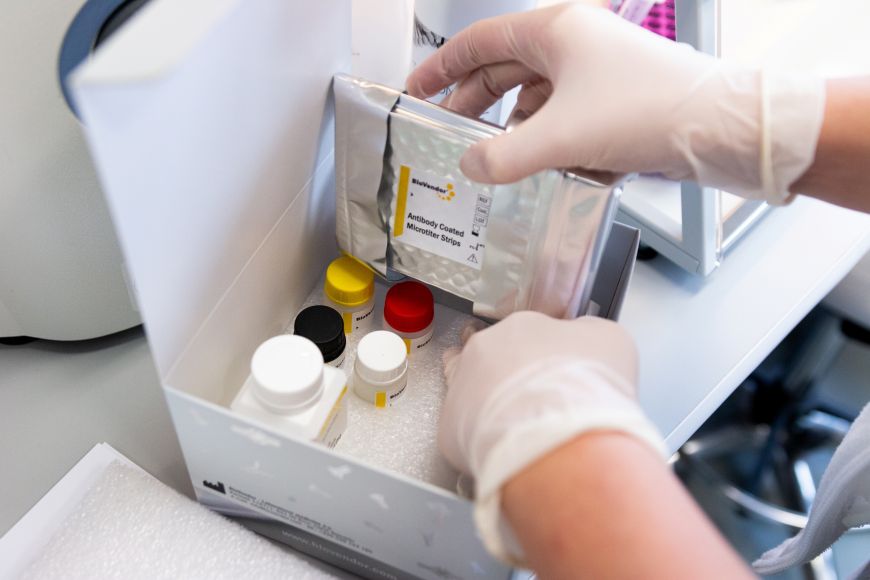 That's why Ondrej Slaby focused his scientific research on finding such an option, and he was successful. The basis of his new diagnostic method is monitoring the levels of several circulating microRNAs that enter the patient's blood from the tumour tissue. From a small blood sample, this method can accurately distinguish whether a person has colorectal cancer or not. Furthermore, it allows for the recognition of the return of the disease in a timely manner, as well as the prediction of the patient's long-term survival.

The search for less invasive diagnostic methods in colon tumours led Ondrej Slaby to the investigation of specific biomarkers - molecules whose presence in the body is characteristic for a particular disease. They can reflect the disease’s biological and clinical properties, and determine the prognosis or response to treatment.

Ondrej Slaby focused on studying the short molecules of non-coding ribonucleic acid (RNA). After completing the sequencing of the human genome project, it became obvious that only a very small part contains genes that encode proteins. The main part of the genome is transcribed into the form of RNA molecules that do not have the ability to form proteins – they are non-coding RNA, with a number of regulatory functions that are also very relevant to the biology of cancer cells. Subsequently, scientists also discovered that cells use small non-coding RNA for communication with other cells. A typical example of such molecules are microRNAs, which cells can secrete into their surroundings.

This is how communication takes place, even inside of tumours. Cancer is not just a cluster of cancer cells, but complex tissue containing various types of supporting cells, regulating, for example, vascular supply, during which microRNA enters the bloodstream. "That's why we can find out from the blood whether there is a tumour or what its properties are," said Slaby.

Work on the new diagnostic set started eight years ago, supported by a grant from the Ministry of Health. "The technological development in the field of nucleic acid sequencing, namely next generation sequencing, represented a great shift for our research. Thanks to this new technology, we were able to easily detect microRNAs, which is characteristic of colorectal cancer," explained Slaby. This new technology allowed scientists to read all the short RNA molecules present in tumour tissue and body fluids, such as blood serum.

To find microRNAs that signal the presence and reflect the properties of the disease, the team had to compare the overall profiles of microRNA in the blood of the colon cancer patients and healthy populations, and the next generation sequencing technology proved to be the most ideal method. This allowed them to identify several dozen candidate molecules that occurred only in patients' blood samples. After further testing of samples from more than 900 healthy and ill people, the team selected four candidate microRNAs and created a so-called diagnostic score, which they patented. It is a mathematical formula based on a combination of the levels of these molecules in the blood serum, and its resulting value accurately reflects the presence of the disease.

"The diagnostic score was later tested on a set of samples in a blinded manner, in which we were able to distinguish colon cancer patients and healthy individuals with very high sensitivity. We also verified that the values of our score decreased significantly after the surgical removal of the tumour, as well as after successful oncology treatment. Our diagnostic kit can therefore be used to monitor the patient's response to treatment and to monitor the patient after the treatment, in order to detect early, any possible return of the disease. Furthermore, we can predict a three-year survival rate from the value of the diagnostic score, regardless of the clinical stage of the disease, which can be very useful for the design of an individual treatment plan," said Slaby.

Scientists have patented the new diagnostic method and began working with the biotechnology company, BioVendor, on its further development. The company contacted the researchers first. "We are engaged in the long-term search for new biomarkers for diagnosis and treatment. About four years ago, we obtained a license for a method that can recognize microRNA using monoclonal antibody and wanted to consult with Professor Slaby, who was among the first scientists in the Czech Republic to work with these molecules. He was just finishing the diagnostic panel for colorectal cancer, and our interests intersected," said Martina Hlozankova, Director of BioVendor´s Research and Development division.

In their own study, the company first verified that the diagnostic method actually works, and made sure that it makes sense to continue developing it. "We had to verify it because when we used to obtain biomarker licenses in the past, only about ten percent of the published studies could actually be verified," added Hlozankova. After intensive collaboration with Ondrej Slaby´s research team from CEITEC MU on further development, the company signed a license agreement with Masaryk University.

However, the work is far from over. The various systems and diagnostic parameters still need to be fine-tuned before they can be introduced into routine practice. The technological process of production must be established, and that will take approximately another half of a year. Furthermore, clinical validation on a group of patients with hereditary forms of colorectal cancer, which make up about fifteen percent of all cases, needs to be conducted. Ondrej Slaby believes that within two years, doctors caring for patients with colon tumours will be able to use his new diagnostic set. Slaby and BioVendor hope that in the future, they will be able to develop a special variant of the test that could also be used in screening, which could further increase the number of early detected cases and save even more lives.