Home About Us News Thanks to my studies at CEITEC, I can change rigid systems, says Lukáš Flajšman. In Finland, he is now laying the foundations for a field that Intel is also interested in

News Interviews and Views Research
Thanks to my studies at CEITEC, I can change rigid systems, says Lukáš Flajšman. In Finland, he is now laying the foundations for a field that Intel is also interested in

I was unable to meet the young promising scientist in person. Right after his studies at CEITEC Brno University of Technology he flew with his family to Finland. From the computer screen he modestly describes his achievements to me. He is currently working at Aalto University on his own scientific project for the Finnish government. The goal? To create a magnetic wave amplifier – even the concept doesn't exist yet. But Lukáš Flajšman can work with the unexplored. Then-new PhD in Advanced Materials and Nanosciences at CEITEC prepared him for this.

Let's go back a few years. The PhD program at CEITEC is relatively new, how did you hear about it?

I studied at the Faculty of Mechanical Engineering with the fact that a significant number of researchers from our field founded the Advanced Materials and Nanosciences programme at CEITEC. So everybody actually knew about it because it was a big thing at the time. And actually, when I started my PhD, the labs were still being built. There were already some instruments, but they were scattered all over Brno.

What specifically attracted you to study there? You couldn't have known much about it because of how new it was.

That's true, but I already knew the people who ran it, so that was a bit of a help. And I knew that it would be more science-oriented as an institute itself. So I figured it would be better for me just because of the prestige that it had. There were the best instruments, and there was a chance to kind of define the field. It wasn't an old institution where there are old structures that you can't get around. All the people there were basically learning and gradually I began to find the study fulfilling.

Did you know what direction you wanted to take in your studies at CEITEC?

Basically, yes, because I had worked a lot with one of my supervisors, Michal Urbánek, with whom I then went to CEITEC. He got a project to develop a new material system for data transmission and processing using spin waves with low energy consumption. This is the field of magnonics. And I found it scientifically interesting and topical. So the topic area was given, but on the other hand, we didn't know much about it. We had to improvise and build up know-how.

How would you explain to a non-expert what you were studying?

Magnonics deals with the physics of spin waves. Basically, these are waves in magnetic materials. If we have two magnets next to each other and we can put a hundred of them in there, they feel each other's magnetic interaction. If I move one of them, the other one mimics it and suddenly I can get a wave. I've used various techniques to study these waves, from electron microscopes to ion cannons to measuring spin waves with lasers. We also had to make a lot of the equipment ourselves, which I think also pretty much defined my time at CEITEC.

Can the results of your research be used in practice?

Not yet, it's basic research. But it is generally believed that magnonics should be able to replace components in modern radars or in the processing of high-frequency signals in mobile phones. At present, electromagnetic waves are used; if we want to process them, we have to use millimetre elements. Whereas magnonics offers the possibility of compressing waves down to micrometres or nanometres, allowing the elements to be made smaller. However, suitable materials are still being sought.

So your research is now being followed up by other CEITEC students?

Yes exactly, there are actually two PhD students who are following up on my research. I'm in contact with them very often. But as I said, I spent a good part of my studies on the development of new devices, and those are used by many more people across a range of topics.

You've already said what the benefits of studying at CEITEC were – more flexible management, space for ideas, co-creation of the field, the best equipment, prestige of the institution. But were there any disadvantages?

It was actually a risk at the time. We had a good track-record (i.e., a statement of accomplishments demonstrating the ability to do the proposed research), so I could certainly apply for some positions abroad at well-known universities. And then I would have come out of my PhD with them and probably had a better scientific output because I would have jumped into already established projects, the know-how would have been there. So going to CEITEC was definitely more of a risk, because we were just building that know-how. I would say our scientific output is lower. Even in one grant application I was told that I was studying for a PhD at an unknown institution (laughs). But that's different now.

Did studying at CEITEC help you in your current work in Finland?

I'm sure. Just because we were introducing a lot of things at CEITEC, creating structures and we had to improvise a lot of times. When I come here to an established laboratory, I see a lot of things that were developed here before and nobody has moved them. So I think I have a much more open mind in changing those things even at those established institutions. And I also dare say that I have a pretty good "set of skills" because of my studies. So I'm not just a scientist who relies on purchased instruments. I'm also thinking around the corner and wondering what I could do to elevate the scientific output. And I think that's true for other students in my year as well.

What are you doing now?

I am working on my own project, which is funded by the Finnish government. The goal is to create a spin wave amplifier, the concept of which doesn't actually exist. So I'm creating one of the many building blocks of magnonics.

How exactly could this be applied to everyday life?

Let me give you an example with signal transmission in mobile phones. We have to capture the signal with the antenna in the mobile, filter it, amplify it, process it and there are several other building blocks before we can hear the voice. Already some of the building blocks are at the limit of the physics on which they are built. And if we converted the whole process into magnonics, everything would be more efficient. We should be able to process signals faster and use much smaller components and sensors. And with that comes greater efficiency in terms of energy consumption. A mobile phone could then last for a month without a charge. There are more such uses, but the building blocks still need to be put in place. I'm working on one of them.

Can you estimate when all the basic concepts might be ready?

I wouldn't dare. It grows exponentially. Especially when market giants like Intel or Qualcomm get involved. These companies can then put together the people and finances that could make it all happen much faster. So far, they've put what I'm working on into their research and are trying to gauge if it has potential for them. 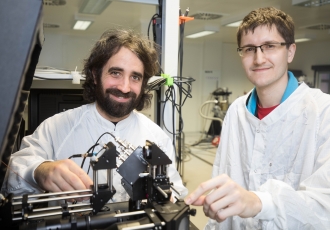 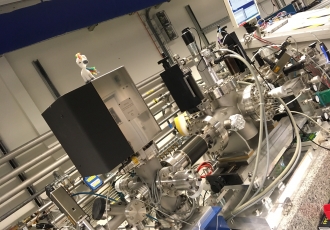 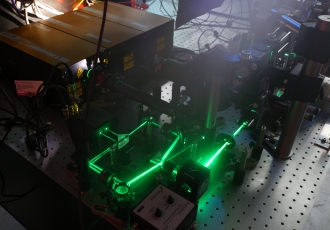 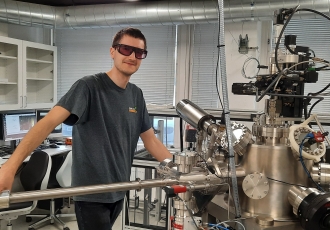