A new device developed by scientists from CEITEC Masaryk University will allow for faster detection of American and European foulbrood and can be used directly in the field.

Bees produce honey, and most importantly, they are pollinators, with most agricultural crops depending on them. They are usually in the spotlight due to the threat that chemical spraying imposes on them, but various diseases and parasites represent a great danger for bees as well. 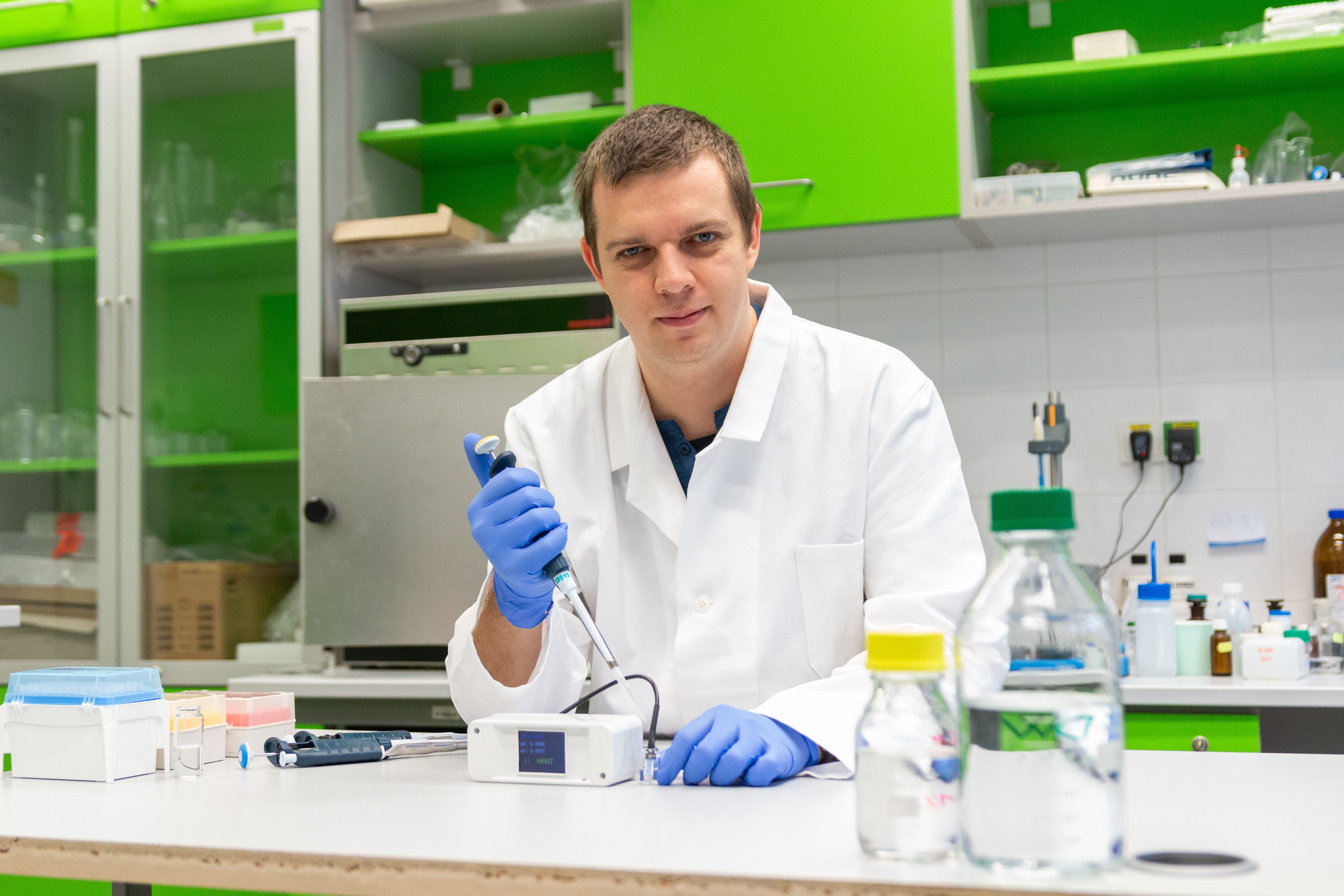 The most serious among these are bacterial infections, such as American and European foulbrood. If the disease appears in the bee colony, the beekeeper must, in accordance with the Czech law, destroy the entire colony by burning it. Nevertheless, the bacteria that causes the diseases live on for a long time, and bees can spread them to other hives. Thus, the sooner we manage to recognize that the bees are ill, the less damage will arise.

A joint project of CEITEC Masaryk University, the University of Regensburg, and the Czech Academy of Sciences can help in this respect. Its goal is to develop new methods and a device prototype for the diagnosis of both diseases – American and European foulbrood.

Zdenek Farka, in collaboration with his colleagues from the Petr Skladal Research Group at CEITEC MU, are working on the development of biosensors to recognize various substances. “Biosensors are devices combining a specific biological layer with a sensitive physicochemical transducer. They are very sensitive and can also be very fast. Usually, it takes several hours or even days to confirm the bacteria presence in a sample, but our devices can do it in a few minutes,” Farka explained.

He started to research the bacteria invading honey bees, thanks to his former colleague’s hobby, beekeeping. Farka has been working on the detection of European foulbrood for several years now. This particular disease has a sporadic occurrence in the Czech Republic – this year, only one outbreak occurred, after a period of three years without any incidence. Thus, the methods for its detection have not been developed with as much focus as in the case of American foulbrood.

“Eventually, we developed two systems for screening the bacteria presence. One of them is very sensitive and intended for laboratory analysis, and the other one is fast and portable,” Farka added. Both systems are based on antibodies that help to detect the presence of specific bacteria. Moreover, the laboratory version uses nanoparticles, enhancing the sensitivity and precision of the analysis.

“For this disease, we have an operating prototype of a device that could be used, especially by surveillance authorities, such as the State Veterinary Administration. The beekeepers, themselves, might tend not to report a small number of bacteria, hoping that the bees’ immunity will deal with them,” the young biochemist explained.

The success of the diagnosis of European foulbrood and the long-term collaboration with Hans-Heiner Gorris from the University of Regensburg and Daniel Horak from the Czech Academy of Sciences has led to the preparation of the joint project, which is financed by the Bavarian-Czech Academic Agency and the Czech Ministry of Education.

“We have been collaborating with Dr. Gorris for about six years. Together, we have prepared, for instance, specially modified nanoparticles for a better diagnosis of prostate cancer. Now, we want to update the methods developed for European foulbrood disease detection so that the same device would be able to also recognize the presence of the more common American foulbrood disease. The received financial support will help us, above all, to participate in research fellowships at institutions participating in the project, and to work together on the development of new detection approaches,” Farka added.

This is not the first diagnostic device which Farka and his colleagues developed. Few years ago, they created an operating prototype, which can quickly detect traces of salmonella in food products. “Sample cultivation usually takes one or two days, but we managed to create a biosensor showing the salmonella presence in milk in twenty minutes,” Farka explained.

According to Farka, this is more of a complementary method that could be used, for instance, in preliminary testing of imported food products. The presence of salmonella could then be confirmed by standard analysis. As with the honey bee disease detection, they created an operating prototype of a portable device for the detection of salmonella infections, which could be developed further to the commercial product stage by biotechnological companies.

They Search for What Works

The most challenging part of the research performed by Farka and his colleagues is the modification of the nanoparticles by biomolecules, such as antibodies enabling the diagnosis of the studied disease. “This is a critical part because it can cause the nanoparticles to stop working,” the biochemist stated. The secret lies in testing and searching for the optimal combination of nanoparticles and biomolecules.