We recently published a comparative evaluation of different combinations of quantum well and barrier materials with a focus on their application in THz quantum cascade lasers. Presently, these devices are dominantly realized with GaAs/AlGaAs heterostructures, which inherently avoid strain. A stagnating maximum operating temperature of 200 K led to a research focus on heterostructures with a low-effective mass in the quantum wells, which should provide higher optical gain, but also lead to a more complex epitaxial growth. On the one hand, these materials require a dramatic shrinking of barrier thicknesses, approaching single atomic layers. On the other hand, Sb-based structures like InGaAs/GaAsSb or InAs/AlAsSb require a precise control of the growth conditions to achieve a reliable group-V mixing to maintain lattice-matching.

An empirical comparison of all material systems, in which THz QCLs have been realized up to date, highlights key parameters and design considerations that need to be addressed for future optimized device generations. These data furthermore allow to extrapolate the expected performance of further candidate material systems. 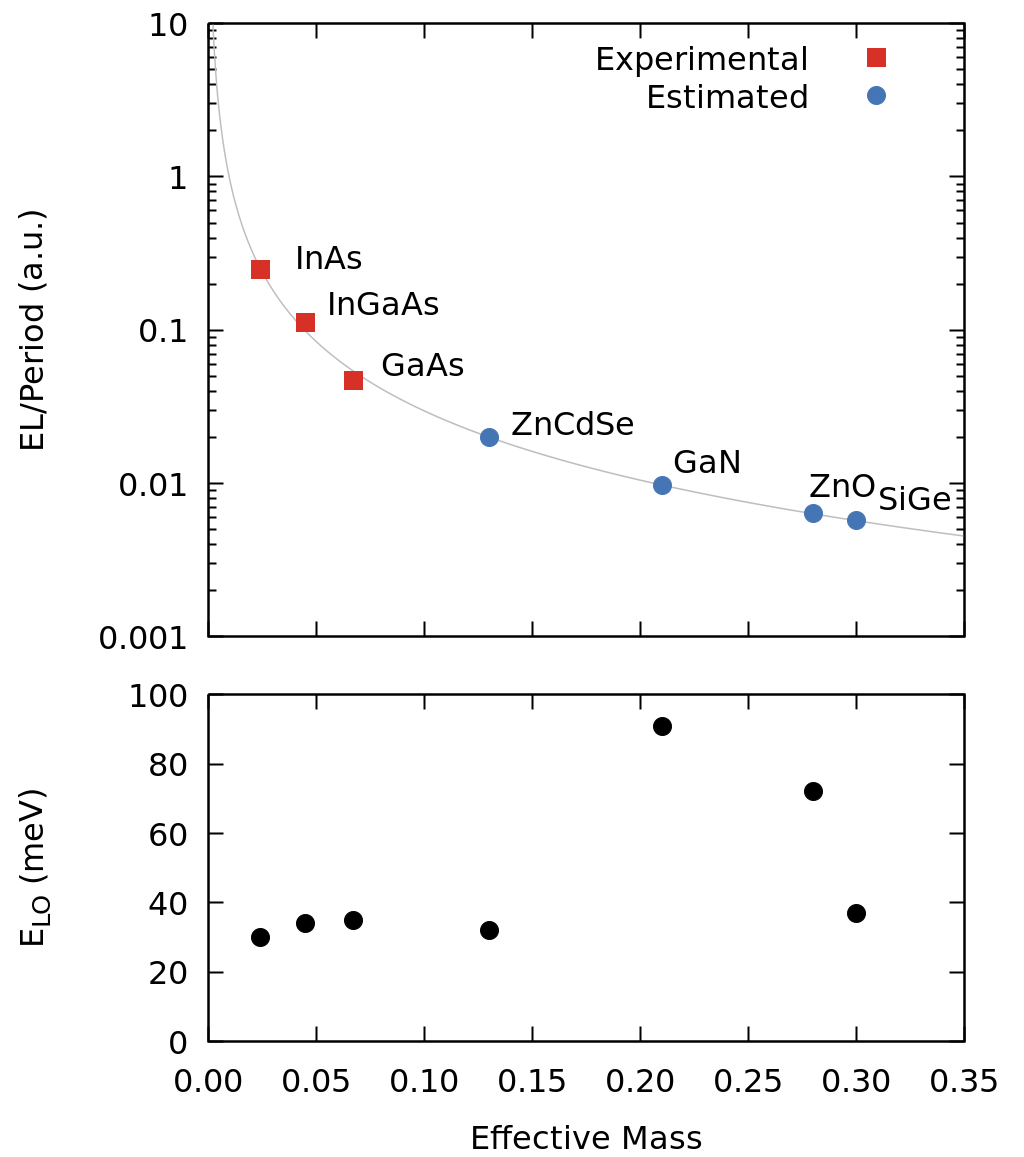 State-of-the-art electronic and optoelectronic devices based on III-V heterostructures benefit from a low electron effective mass in multiple respects. Pseudomorphic InGaAs channels enable higher carrier densities and mobilities for high-frequency applications. Furthermore, a lower effective mass translates into larger dipole matrix elements and therefore higher optical gain in quantum cascade lasers. The integration of low-effective mass compounds like InGaAs or InAs with established GaAs or InP-based technology platforms is limited by the strain that is introduced due to the larger lattice-constant of InAs. The addition of boron in minor fractions is a promising path to compensate this strain and therefore allow more flexibility with respect to the In-fraction or the thickness of In-containing layers. While BGaAs seems like an ideal candidate material for strain-engineering, it has not been studied to the same level of detail as other III-V compounds due to technical challenges. 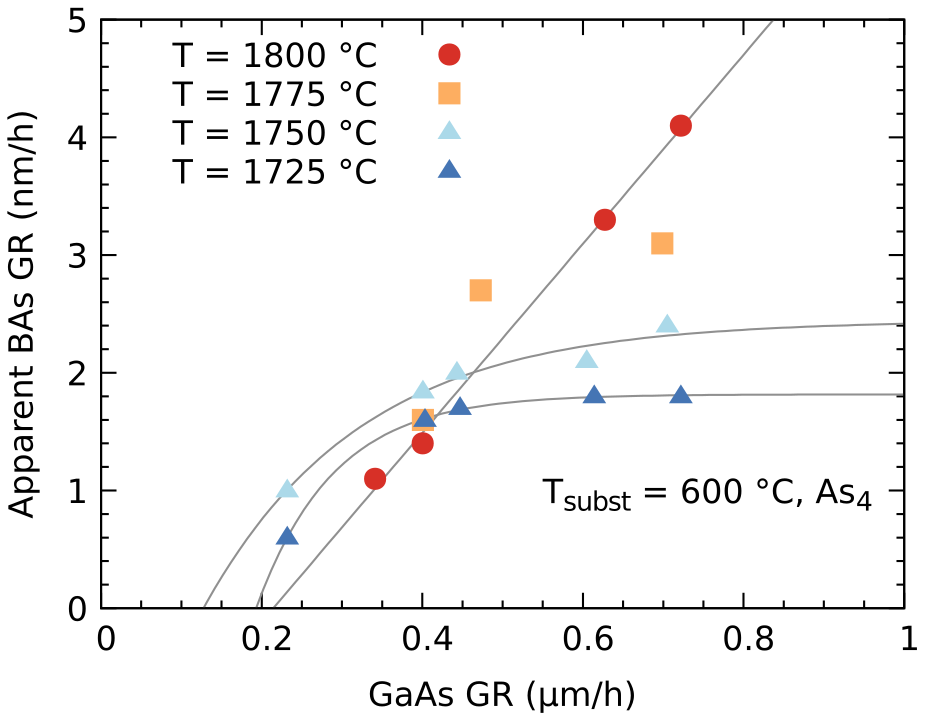 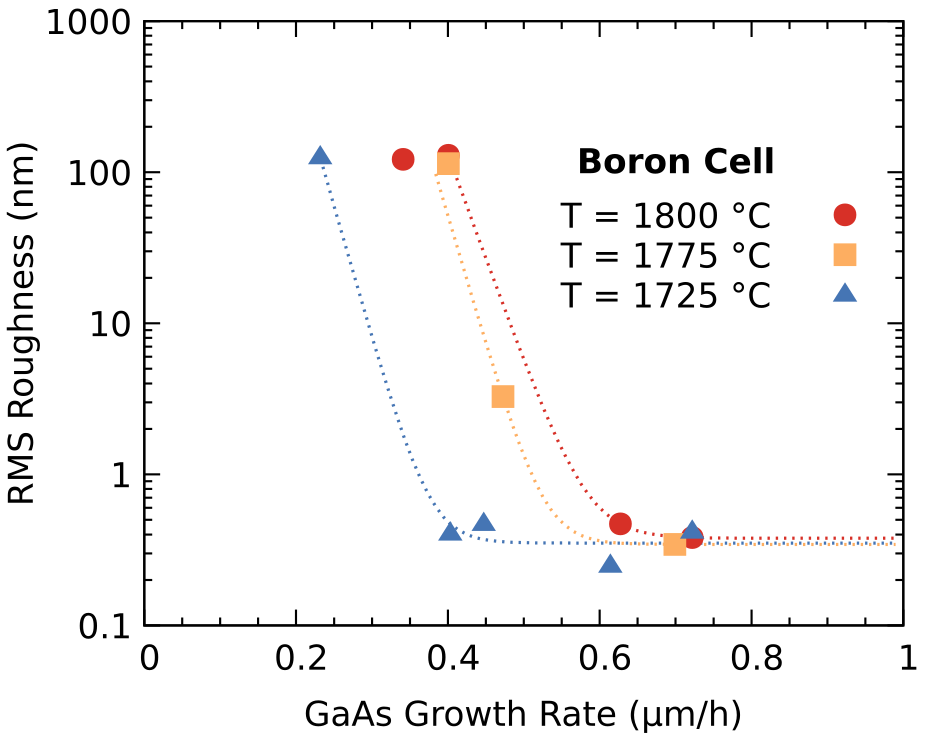 The integration of nanowires into electronic devices commonly requires the growth at well defined positions, often within arrays. There are several methods to achieve selective area epitaxy, where the desired pattern is transferred into a hard mask before the actual nanowire growth. Common processes are electron-beam lithography and nanoimprint lithography, which both require organic chemicals (electron-beam resist, imprint-resist, solvents). Yet, hydrocarbons provide a contamination risk for ultra-high vacuum processes like molecular beam epitaxy and therefore require extensive cleaning processes. We developed a lithography-free positioned growth mechanism for GaAs nanowireson Si substrates, which relies on Ga implantation by a focused ion beam. When annealed in vacuum, the implanted Ga forms droplets, which are used as catalyst particles for the consecutive growth step. This process allows flexible geometries without the use of any organic chemicals or wet-chemical etching steps and is therefore fully compatible with UHV technology. 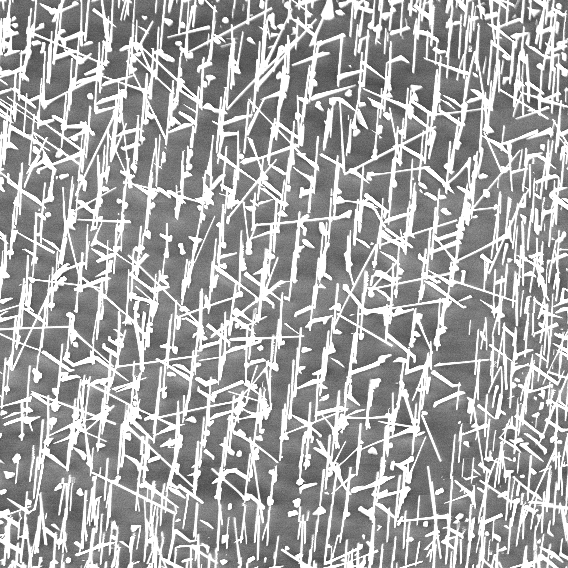 GaAs nanowire array on Si (111). The pattern was defined through FIB implantation. The nanowires were grown by molecular beam    epitaxy.

Modern optoelectronic intersubband devices like quantum cascade lasers or detectors are based on III-V semiconductor superlattices with well-defined layer thicknesses and alloy compositions. Deviations from the ideal structure due to interfacial strain, roughness or due to the segregation of dopants were shown to significantly influence device characteristics. Such effects can not directly be described by the commonly used envelope function approximation based models but require a higher level of detail. Atomistic models based on empirical interaction potentials provide a computationally efficient way to describe simulation boxes with length scales up to tens of nm while still maintaining the crystalline structure. The atomic interactions are modeled using the Tersoff potential, which allows a good fit to the structural and elastic parameters. In order to model roughness formation at heterojunctions during epitaxial growth, we developed an algorithm that minimizes the total energy of atoms at the interface. The structural model is then coupled to an envelope function approximation based Schrödinger-Poisson solver through extracted strain profiles as well as through characteristic features at the interface. 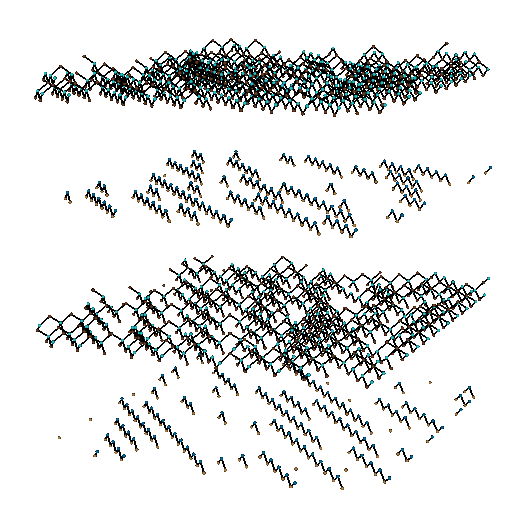 Optimized interface configurations for an InAs/GaSb multi-layer system. The growth direction is from bottom to top. Heterojunctions from InAs to GaSb (1st and 3rd) are smooth, while the reverse case from GaSb to InAs (2nd and 4th) show a significantly increased