Home About Us News Evolution of Plant Telomerase RNAs: scientists reveal the origins of the enzyme of immortality can be traced to more than a billion years back in time

News Press Releases Research
Evolution of Plant Telomerase RNAs: scientists reveal the origins of the enzyme of immortality can be traced to more than a billion years back in time

Telomere biology is a hot research topic due to its relevance to cellular aging and immortality, but also due to its role in genome stability and the development of serious human diseases, including cancer. The team of authors from CEITEC Masaryk University and from the Institute of Biophysics of the Czech Academy of Sciences, led by Petr and Jiri Fajkus, has recently published a scientific study in which they significantly expanded the range of organisms with known RNA subunit telomerase and herewith clarified the common origin of telomerase RNAs in plants, algae and even in more evolutionarily distant single-celled organisms, such as ciliates or diatoms. Their study went further into the past and also deeper into the roots of the phylogenetic tree of eukaryotes. Their ground-breaking research results have provided entirely new insights into the evolution of key eukaryotic non-coding RNAs spanning more than a billion years back in time, and were published in the prestigious scientific journal Nucleic Acids Research. 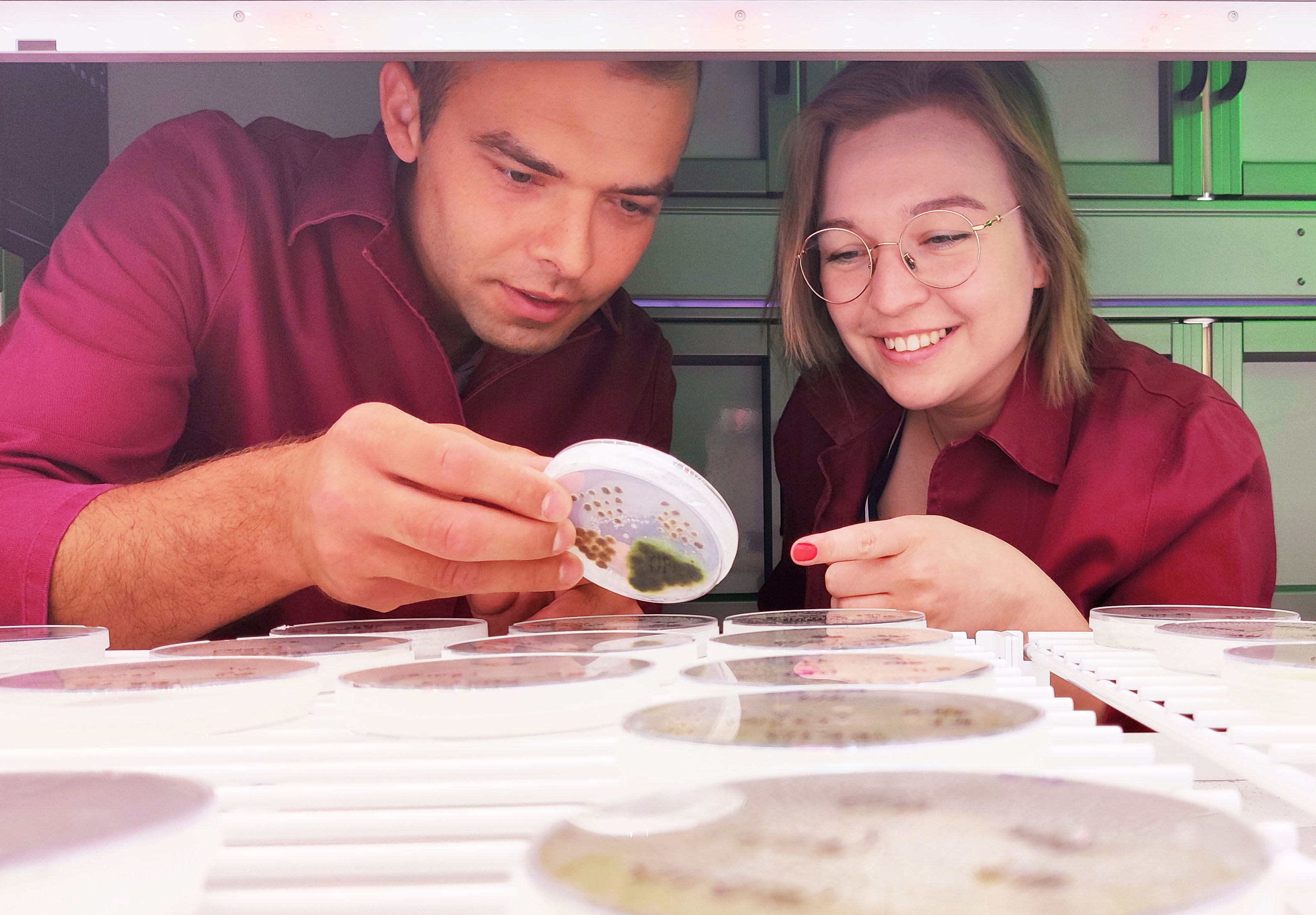 Telomerase is a complex that can compensate for the shortening of chromosome ends (telomeres) in cells due to their incomplete copying before each cell division. Without telomerase, chromosomes are shortened each time they are copied in each cell cycle. Telomerase activity thus influences whether the number of possible cell divisions will be limited or unlimited. Cells with active telomerase are therefore immortal in this sense. An unlimited number of cell divisions is typical, for example, for human stem cells, tumour cells, or plant cells. Most human somatic cells do not have active telomerase and so only have a limited number of cell divisions. That is why our cells, tissues and our whole organism age. If scientists understood exactly how telomerase activity is regulated, they could reveal the biological secret of cell immortality. Professor Jiri Fajkus and his team have been studying telomeres and telomerase for over 25 years and were the first researchers in the world to detail telomerase activity in plants in 1996.

The basic component of telomerase is the telomerase RNA subunit, also known as TR, which provides a template for DNA synthesis at the ends of chromosomes. TR also serves as a scaffold to assemble the entire telomerase complex by telomerase reverse binding transcriptase (TERT) and other proteins. The TR template region is also a key site where telomerase binds to the ends of the telomere, which are then extended. “The sequence of the TR template region can therefore be derived from the telomere sequence with which it is paired and on which basis it is synthesized. Two years ago, we characterized TR within the evolutionary tree of all vascular plants. That's when we found that plant TR genes are not transcribed from DNA to RNA by RNA polymerase II, such as in humans and other animals or yeast, but by RNA polymerase III, and that this transcription is controlled by a short region of DNA, called a promoter, in this case, the so-called type 3 promoter. It consists of motifs called USE and TATA, and is conserved within vascular plants, i.e., very similar. It was therefore possible to use it together with the predicted sequence of the TR template region as a characteristic feature to search for TR genes,” explains Petr Fajkus, detailing the aim of his research. 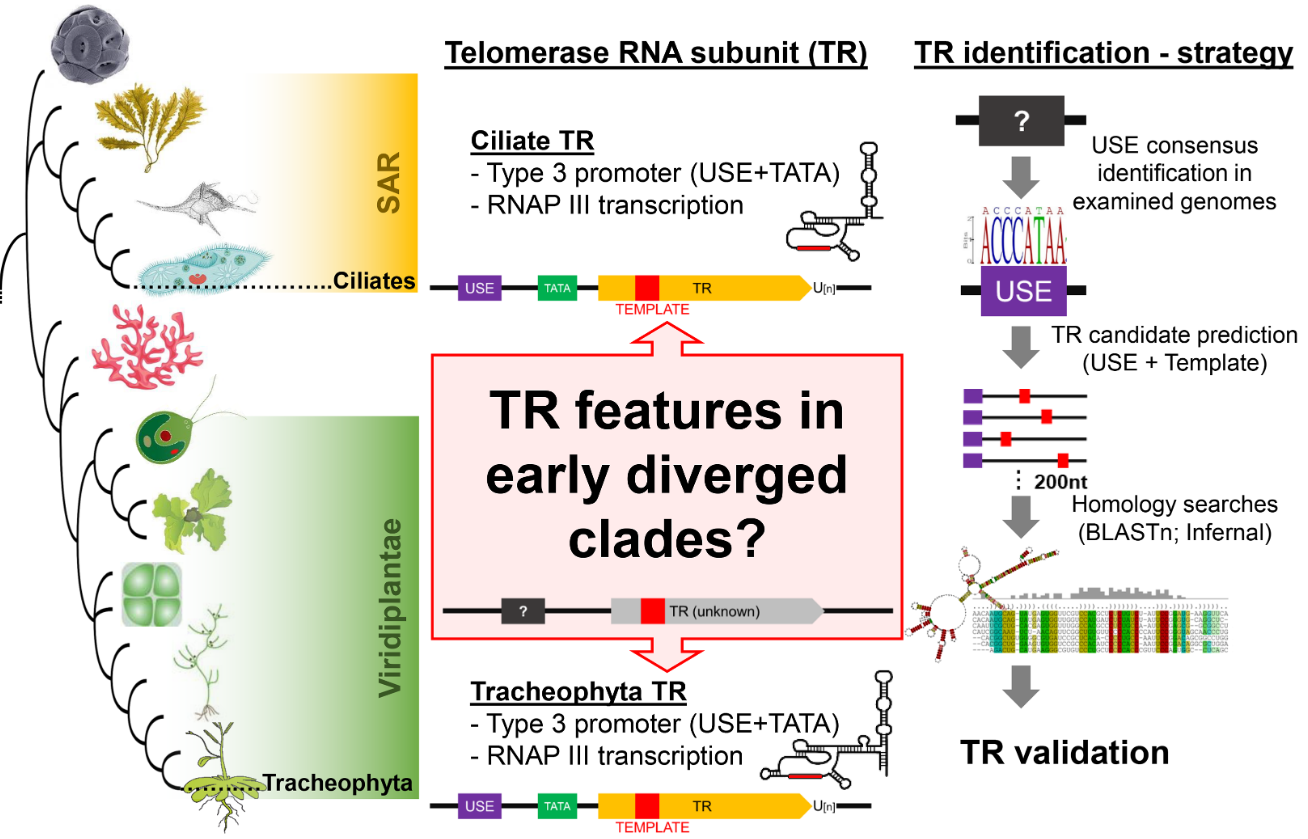 In the newly published work, the authors embarked not only on the characterization of TR in evolutionarily more distant "siblings" and predecessors of land plants, such as bryophytes and algae, but also even more distant organisms, such as unicellular protozoans (e.g., ciliates), which share the same phylogenetic “megagroup” with plants, in this case called Diaphoretickes. “This means that more than a billion years ago, organisms from this megagroup had a common ancestor. However, due to the large differences in TRs and promoter sequences within such a wide range of organisms, it was not possible to search for TRs in these organisms simply based on the sequence similarity of TRs and their promoters. Therefore, we decided to use the following strategy: first we tried to find out exactly how the type 3 promoter looks like in the genomes of a certain narrower group of organisms, and then we used this sequence together with the predicted template region sequence in TR to identify the TR. Thus, the exact structure of the promoter was determined from the genes of these RNAs and subsequently we searched regions containing the assumed TR template sequence,” Petr Fajkus explains, describing his unique research strategy.

Once the first candidate TRs were identified, the search for further TRs in closely related organisms was already possible either directly on the basis of sequence homology or using so-called covariance models. These also consider the conservation of the secondary structure of the RNA sought, which contains a number of regions where single-stranded RNA forms various types of loops with itself. Finally, it was necessary to experimentally confirm the existence and functionality of selected candidate TRs. Experiments performed on Physcomitrium patens (moss) performed in collaboration with Dr. Marcela Hola from the Institute of Experimental Botany of the Czech Academy of Sciences, unequivocally confirmed that the newly characterized TRs are genuine subunits of telomerase. In addition, structural modelling of the obtained TRs in collaboration with Dr. Andrew Nelson from the Cornell University, USA, confirmed that the basic structural motives of TRs across the Diaphoretickes megagroup are indeed remarkably conserved.

These results thus provide completely new insights into the evolution of key eukaryotic non-coding RNAs over a period of more than a billion years and push the boundaries of human knowledge about the origin of telomerase, which guarantees cellular immortality. "It is not without interest that this origin is closely related with another milestone in the evolution of eukaryotes – RNA splicing,” concludes Jiri Fajkus.