Home About Us News New treatment options for neuroblastoma. Miguel Merlos investigates the effect of human protein, which may affect the effectiveness of chemotherapy

News Research
New treatment options for neuroblastoma. Miguel Merlos investigates the effect of human protein, which may affect the effectiveness of chemotherapy

Even as a small boy, the Spaniard Miguel Angel Merlos Rodrigo wanted to be a scientist or a doctor. Thanks to his diligence and hard work, his dreams came true. He became a scientist in the field of medicine, and at CEITEC BUT under the leadership of Vojtěch Adam, he now investigates the effect of a protein called metallothionein-3 on chemoresistance in the treatment of neuroblastoma. He recently published the results of his research in the prestigious scientific magazine Scientific Reports - Nature. He also has several awards focusing on oncology research, such as an award from the European Society of Medical Oncology. 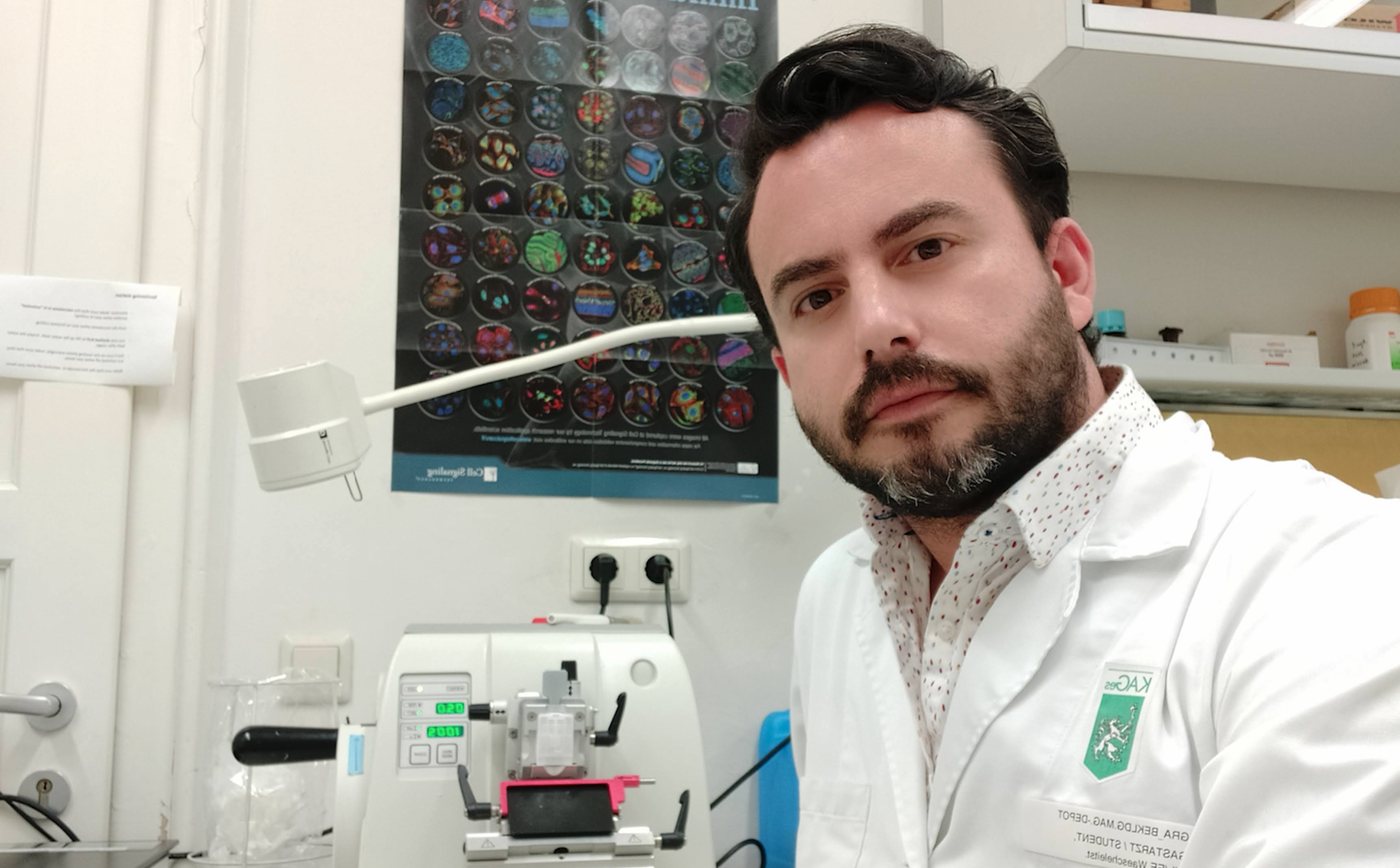 Your research deals with the protein metallothionein-3. Can you describe its functions and properties?

Metallothioneins are small cysteine-rich intracellular proteins with many important and crucial functions. The most important of them include the detoxification of both essential and non-essential heavy metal ions, such as cadmium or mercury, homeostasis, and control of zinc and copper ions and metal-transfer reactions. In their primary structure, they are rich in cysteine and have no aromatic amino acids. Human metallothionein-3 is predominantly expressed in the central nervous system and participates in the processes of metal detoxification, metabolism regulation, and protection from damage caused by oxidative free radicals. Metallothionein-3 has been described as complicatedly associated with a wide range of diseases, including cancer, diabetes, retinopathy, and various brain diseases, such as Alzheimer’s disease. However, the significance of metallothionein-3 expression outside the central nervous system and its involvement in carcinogenesis was unclear. For this reason, my research focuses on the study of the regulation of metallothioneins in cancer and chemoresistance in anticancer drugs.

Specifically, you investigate the association of metallothionein-3 with chemoresistance in neuroblastoma. What are the limits of treatment for this disease?

Neuroblastoma is a pediatric malignancy that typically arises in early childhood. By the time cancer is diagnosed, it has usually metastasized. Neuroblastoma spreads most often to the lymph nodes, lungs bones, liver, and brain. Early detection of the tumor may therefore be beneficial. In chemotherapy for neuroblastoma, cisplatin, a platinum coordination compound, is generally used as one of the most effective drugs. It is a cytotoxic drug that kills cancer cells by damaging DNA and inhibiting its synthesis. Despite the high efficiency of cisplatin, cancer cells frequently develop a cisplatin-chemoresistance phenotype, which could be due to a wide spectrum of causes, including decreased blood flow into tumor mass, inhibited internalization of cisplatin, exocytosis of cisplatin, intracellular sequestration, halted DNA repair, or apoptosis-driving mechanisms. Due to these biological phenomena, more than half of children diagnosed with high-risk neuroblastoma either do not respond to conventional therapies or relapse after treatment with a dismal prognosis. Therefore, there is a real need to provide more effective treatment for children with neuroblastoma.

And what role does metallothionein-3 protein play in the formation of carcinogenic cells and metastases?

In this study, we developed a Chick Chorioallantoic Membrane (CAM) Assay xenograft tumor model protocol using a cisplatin-sensitive and resistant neuroblastoma cell lines for monitoring the influence of cisplatin drug on the invasion of neuroblastoma cells in vivo. This was done in collaboration with a prestigious specialist in this novel technology, Dr. Berta Casar from The Institute of Biomedicine and Biotechnology of Cantabria (IBBTEC) in Spain. Xenograft models of human cancer play an important role in the screening and evaluation of candidates for new anticancer agents and the study of the molecular pathways of cancer. And we elucidated the potential mechanisms of metallothionein-3-mediated induction of neuroblastoma invasion and cisplatin-chemoresistance in a CAM xenograft tumor model. Human metallothionein-3 was revealed as an important driver in the extravasation, migration, and intravasation of neuroblastoma cells, which is consistent with the reported major regulatory role of metallothionein in cancer metastasis.

How specifically could these results help with the treatment of neuroblastoma?

Our study provides a comprehensive list of approximately 80 proteins in coexpression with metallothionein-3 that can be further investigated as prognostic biomarkers for cisplatin chemotherapy or as possible druggable targets. The identification of alterations in specific proteins and pathways that contribute to cisplatin chemoresistance may potentially lead to a renewed interest in the development of novel rational therapeutics and prognostic biomarkers for the management of cisplatin-resistant neuroblastoma.

What stage of research are you at?

How long might it take for the results of the research to be applied in healthcare?

Unfortunately, it is not easy to answer this question. Hopefully, we will translate (move) our basic science discoveries more quickly and efficiently into practice in the near future.

Which method are you using for this kind of research?

We carried out an array of experiments designed to understand the role of human metallothionein-3 in a complex multi-step process, i.e., carcinogenesis, metastasis, and susceptibility of this process to cisplatin administration in the chick chorioallantoic membrane (CAM) assay as an in vivo model. For this purpose, we were using for example Matrix-assisted laser desorption/ionization time-of-flight (MALDI-TOF) mass spectrometry (MS) for verification of the metallothionein-cisplatin complex. Also, we were using the cutting-edge molecular techniques such as cloning, transfection, confocal laser scanning microscopy (CLSM), and other methods.

How did you get to this research area?

It was mainly due to my previous knowledge. The major aim of the research during my Ph.D. period was the characterization of higher molecular thiols (among them, metallothioneins) in biological samples using matrix-assisted laser desorption/ionization time-of-flight mass spectrometry (MALDI-TOF-MS). Many of the samples that I used during this period were organs tissues, including tumors. In addition, during my Master's diploma in Spain, I also studied the mechanisms of metallothioneins and phytochelatins as metal chelators in plants. Therefore, my scientific career has always been linked to this family of proteins.