Home About Us News Genome Origin and Evolution of an Important Crop, Camelina sativa, and its Relatives Uncovered by Czech Scientists

Terezie Mandakova and her colleagues, Milan Pouch and Martin Lysak, from the Martin Lysak Research Group at the Central European Institute of Technology, Masaryk University, deciphered the ancestors and closest relatives of the Camelina sativa plant in such depth, unlike any other scientist before. The previous genome sequencing-based study showed that the camelina genome consists of three subgenomes merged through a hybridization between unknown parental species. Terezie Mandakova and her colleagues aimed to identify the most probable parental genomes of the hexaploid camelina, and to reconstruct the genome structure and evolution of all known Camelina species. New pieces of Camelina genome history now provide fresh insights necessary for exploring possibilities for the future improvement of this ancient and economically important crop. The unique study of Mandakova and her colleagues was published in the November 2019 issue of the prestigious journal, The Plant Cell (IF 8.6) and was also highlighted in the journal's In Brief section.

Most plant scientists conduct their experiments on a model plant Arabidopsis thaliana from the mustard family. Mandakova and Lysak decided to study the genome evolution of Camelina sativa (also known as false flax or gold of pleasure) – a close and commercially important relative of Arabidopsis. Camelina sativa is an ancient oilseed crop that has grown in Europe as early as 4 000 BC. Camelina was largely forgotten as a crop, but was recently re-discovered for its unique characteristics. Camelina oil, extracted from seeds, has a very high content of omega-3 fatty acids (39%). Most of the fats in camelina oil are polyunsaturated. These “good fats” are essential for healthy cell functioning in the human body, such as for reducing the risk of heart disease. Camelina oil is also excellent for skin and hair due to its ample amounts of vitamin E and omega fatty acids. Last but not least, camelina oil is known for its antioxidant and anti-inflammatory properties, which make it perfect for aiding human immune systems. Camelina oil can be used as a cooking oil, pure oil, a food supplement, or biofuel, and has become increasingly popular for its potential as a renewable industrial feedstock. Camelina is also known for its excellent drought resistance, and can be grown almost anywhere, which makes this plant even more valuable, considering climate change. Research was also done to develop its oil for jet fuel and other high-value chemicals. Presently, camelina is grown mainly in the United States, Canada, Slovenia, Ukraine, China, Finland, Germany, and Austria.

Comparative Chromosome Painting as a Tool for Plant Genome Analysis 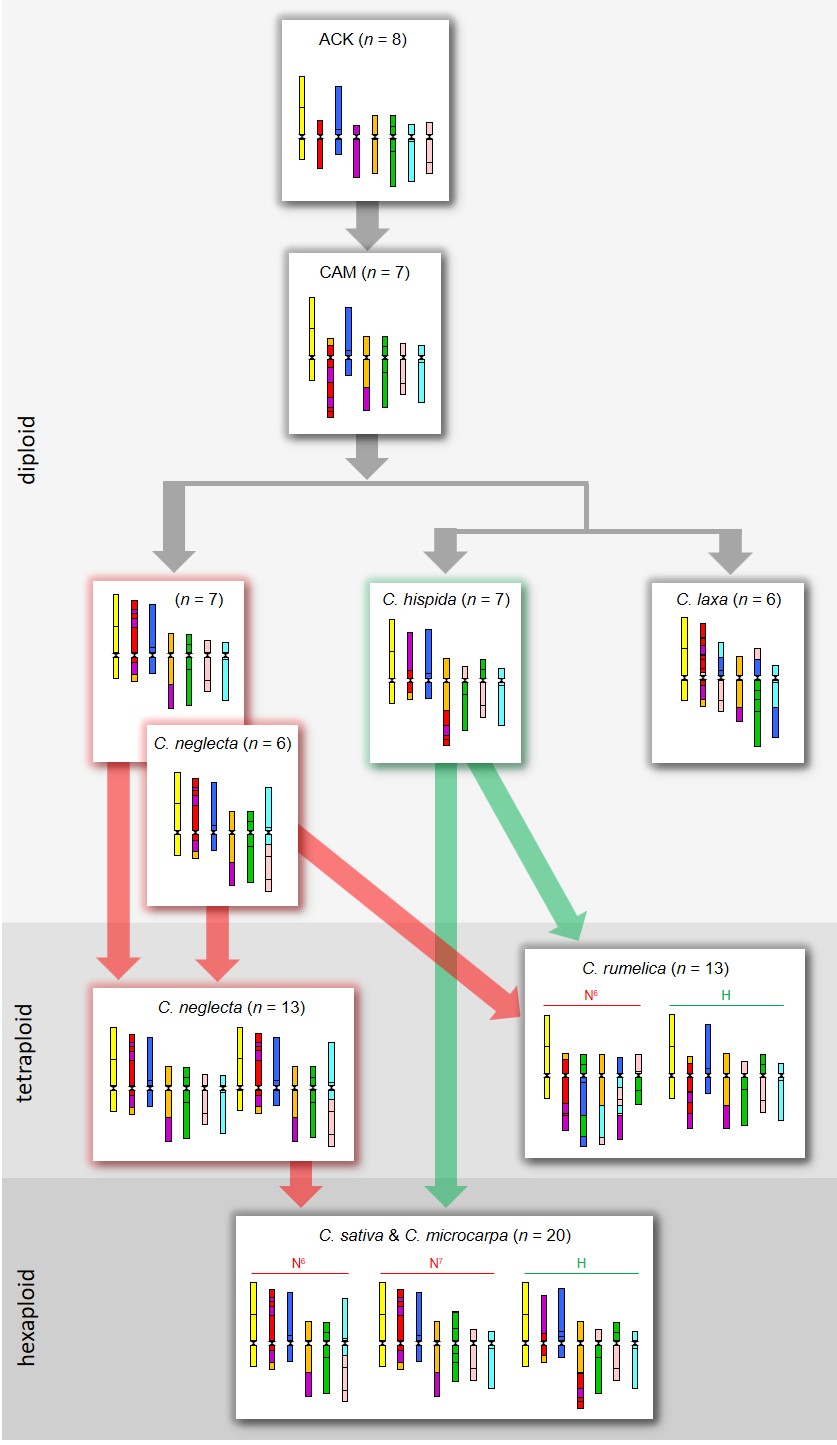 Canadian researchers already performed sequencing of the genome of Camelina sativa in 2014 and found that its genome is hexaploid and consists of three distinct subgenomes – a similar genome make-up to oilseed rape and wheat. Mandakova and Lysak further expanded the current knowledge about camelina with the help of a particular method, called comparative chromosome painting. While this method is commonly used in human and animal research, only a few plant scientists around the world use it for studying plant genomes. How does chromosome painting work? The foundation is the similarity between Arabidopsis and other plants from the mustard family. The Arabidopsis genome is cut into tiny fragments with the help of restriction enzymes; these fragments are cloned into bacterial plasmids in order to create so called BACs – bacterial artificial chromosomes. Those BAC “cocktails” are than labeled with fluorescent dyes and hybridized onto chromosomes of the studied species from the mustard family. This allows scientists to reconstruct the genome structure of a species, identify chromosome rearrangements and parental genomes, and compare the genome structures of various plant species.

The cytogenetic methods used are explicit, and as a result, other well-known institutes use the cytogenetic maps developed by Martin Lysak's Group for genome formation and the specification of genetic structures. Mandakova managed to reconstruct the parental genomes of Camelina sativa and to discover the evolutionary history of the hexaploid genome, as well as the mechanisms responsible for the current form of genomes studied. She successfully traced the camelina genome to millions of years into the past and observed all of the naturally occurring genetic crossings of this unique plant that took place with the absence human intervention. No other scientist has revealed the camelina´s genome in such depth as Terezie Mandakova and her colleagues have.

Remarkably, the ancestral and diploid Camelina genomes were shaped by complex chromosomal rearrangements – the so-called chromothripsis. Chromothripsis can be explained as a catastrophic event in the cell´s history that causes the clustering of up to a thousand cells in one location. This event is commonly associated with human diseases and can lead to the development of genome-specific shattered chromosomes. Chromothripsis is very rare in plants, but very common in diseases such as leukemia.

This unique discovery was possible thanks to a standard three-year GACR grant titled, Missing Links: Genome Evolution in Camelina Species (GA17-13029S), which was awarded to Terezie Mandakova by the Czech Science Foundation GACR.

There are multiple implications for the groundbreaking discovery by Mandakova and Lysak. Breeders like to improve the seed yield, oil content and other agronomic traits of the camelina crop. This is possible if new camelina lines are produced by crossing the now identified parental Camelina species. Furthermore, the diploid and tetraploid Camelina genomes should be more amenable to genome sequencing and uncovering the essential genes that influence yield and other desired agronomic traits. 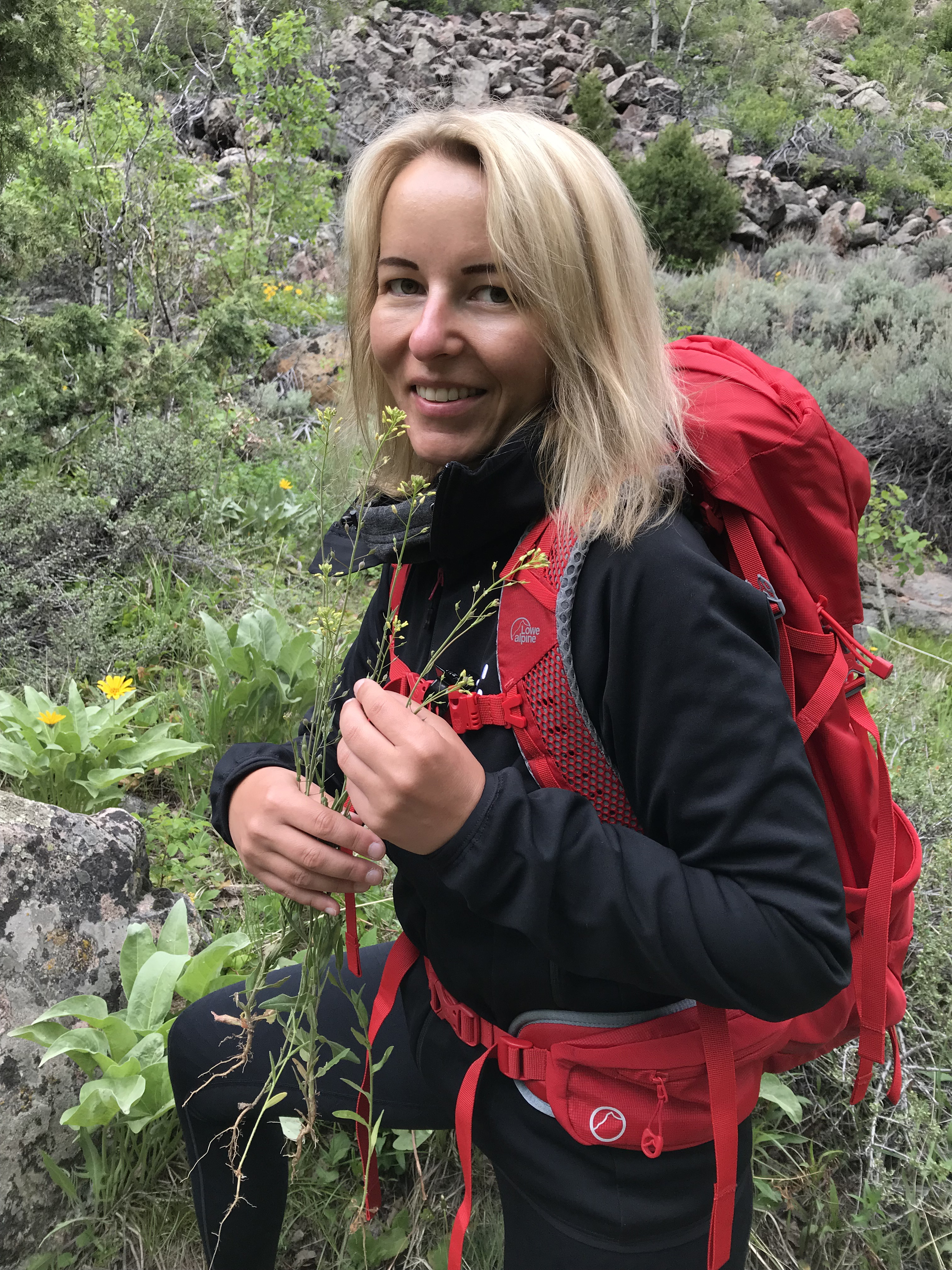 Terezie Mandakova is regarded as a world-class scientist in plant cytogenetics and is one of the most successful female researchers at CEITEC. As a member of Martin Lysak’s Research Group, she is engaged in the study of the evolution of the plant genome structure of Brassicaceae and its relatives. Her engagement, enthusiasm and time management are virtually enviable and contagious to her students and collaborators. Thanks to these exceptional qualities, Terezie achieved several remarkable accomplishments in the field of plant genome research. In 2018, Terezie was awarded for extraordinary research results achieved by scientists in the age group under 35 from the Rector of Masaryk University. Thanks to her excellent scientific results, Terezie is regarded as one of the best plant cytogenetics scientists worldwide, with more than 70 publications, 1800 citations, and an h-index of 21.

During her PhD studies and early years in her career, Mandakova published several highly cited papers that made a very significant contribution to our understanding of chromosomal and genome evolution in plants. She published articles in numerous top-ranking journals, either in collaboraton with the Lysak Research Group, or with international collaborators (e.g., Nature Genetics, eLIFE, Plant Cell, New Phytologist, Plant Journal, Plant Physiology, Curr Opin Plant Biol, BMC Evolutionary Biology, etc.). She has become a respected member of the scientific community, and has frequently been selected as an invited speaker at international conferences.

Mandakova also contributes to society through her pedagogical activities. She has been recognized as a beloved supervisor, teacher and trainer, as well as a wonderful colleague who keeps up the positive spirit of the lab. Terezie is an inspiration for her students and colleagues, not only because of her extraordinary scientific results, but also due to her enthusiasm for science, and hardworking approach combined with kindness and modesty.