Home About Us News Two Scientists from CEITEC Masaryk University Received ERC-CZ Grants. They Will Focus on Infections 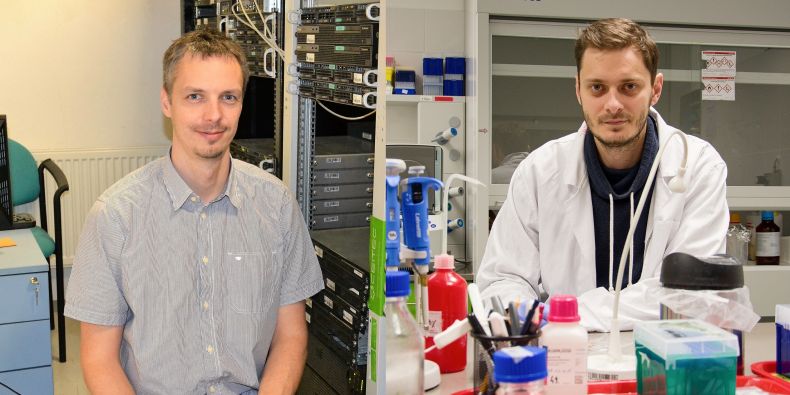 Robert Vacha and Gabriel Demo both applied for the ERC CZ grant, and their research proposals were evaluated as the top two research projects from the eight supported projects in the Czech Republic under the ERC-CZ program. This scheme supports research projects that have received the highest mark in the evaluation by the European Research Council, but could no longer be funded by EU funds.

“In the field of life sciences, we have become the academic institution with the highest concentration of these prestigious grants within the Czech Republic. It turns out that our model of an organisation, based on independent research groups, works and supports even young scientists,” said Jiri Nantl, Director of CEITEC MU.

The best-rated project by the Ministry of Education was Robert Vácha's proposal entitled, “Peptide Killers of Bacteria,” which received 62 million CZK in support. Its goal is to identify and develop new proteins capable of killing bacteria, specifically, antibacterial peptides. However, their targeted development is hindered by a lack of understanding of the behaviour of these substances at the molecular level. This is what Vacha and his team want to address.

“We will explore and develop new peptides that have the ability to disrupt bacterial membranes. In the future, we would like to target specific types of bacteria that cause serious infections,” said Vacha, from CEITEC MU.

The second-best rated project was Gabriel Demo’s proposal entitled, “Communication Between Transcription and Translation,” which focuses on the investigation of the genetic information of a virus and its behaviour in an infected cell. Transcription is the process in which part of the DNA in the cell nucleus is transcribed into RNA. This RNA then travels outside of the nucleus to the ribosomes, where a particular protein is formed during the translation process.

“However, some viruses with genetic information in the form of double-stranded DNA, such as smallpox viruses, replicate outside of the nucleus in the infected cell, which means that the transcription and translation processes are interconnected, which contradicts what we knew about the processes so far. We want to test this hypothesis and contribute to the search for new possibilities that could prevent viral infections,” Demo described his research idea that received almost 50 million CZK.

At CEITEC Masaryk University, there are currently three ERC CZ and two European ERC projects running, which have been directly financed by the prestigious European ERC grant scheme. Another European ERC grant, which was also awarded to Pavel Plevka, was completed last year.